The EUSSR and Remain Supporters Say F**k The Law And Democracy. 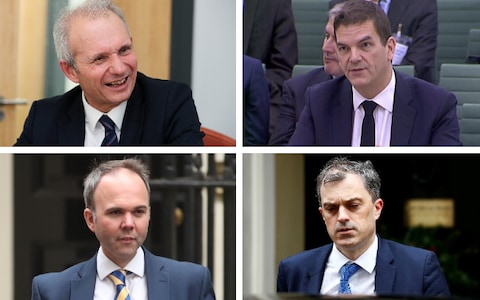 Above are cretinous law breakers, it would appear, as shown in this carefully argued essay. These are the modern creeps who hate the people and democracy. In the article it claims, quite logically, that Civil Servants and EUSSR Commissars accepted a change of wording of Article 50 to enable the UK Government and that ghastly woman, May, to lock us in to an endless remain prison.

All the terrible and divisive nastiness of a remain Parliament has been allowed to flourish on the back of a disgraceful misrepresentation of solid legal facts enshrined in Article 50. Facts which the Lisbon Treaty incorporated for the very reason to avoid the ess aitchh 1 tee poured down on us now for over three long years.

As ever, with the deep state, the law is as much theirs to play with as our ordinary lives, souls and existences are. The loss of democracy something demanded of dictators throughout history. Horrors of the past, genocides and Nazi style brutality done under "laws" engineered by those unhappy with the restrictions of decent legislation once part of the protection in this Nation of the weak and the poor.

Parliament closed for a few weeks yesterday. The behaviour of many, mostly of the LibDum, Marxist crowd and facilitated, aided and abetted by that poison dwarf thug, seen kicking another MP as he, the midget, left the Chamber, was a foretaste of the vitriol and gangster, law breaking mentality, the suppression of the referendum result has engendered.

In the background are the shadowy Civil Service Gestapo and their counterparts across the Channel. All conspiring, seemingly deliberately, to flout the law. The subject article of this post, at first read, looks unassailable. Unless, of course, emergency "powers" are fabricated by the self same crooks and power crazed, self obsessed scum who it would seem have us all at their mercy.

People like Hammond, Grieve, Eggy Major, May, et al all screaming "Foul" at our Peoples' PM and rushing to dupe, bribe or blackmail Judges to get their illegal and undemocratic needs. Well, if, as is looking very probable, they are the law breakers, along with Barnier, Verhofstadt, Merkel and Macron and get found out as such, we may yet avoid terrible violence and war across Europe and the UK.

War, as yet, confined to Lord Haw Haw media battalions, lined up, with their bias and lies. With their more and more Gestapo like remain bosses. All of them looking culpable, in an unconscious or possibly deliberate, alteration of Article 50 wording, to fit their nefarious ambition and self interest. all readily swallowed by the remain Parliament.

We must pray very, very hard, the facts as presented are correct and are upheld. Our freedom deserves better and our referendum result deserves a recognised implementation. The Law is for fairness and justice. Not for the few but the many, to quote Crazy Commie Corbyn's favourite slogan. Funny how it rings so hollow from his twisted logic and mouth.

From the QC's own article, I quote;

"(i) The application by the Prime Minister for an extension of time until June 30th under the proviso to  Article 50, made on or about the 14th March 2019, was legally valid, but was rejected by the EU.