Before Anyone Cries Ridiculous, Stop And Think.

Follow this link for a fact check of the SS picture. 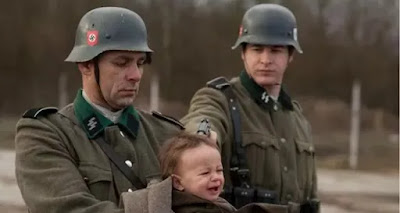 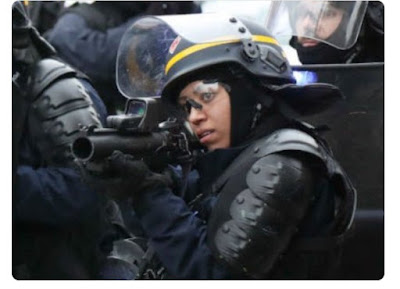 The bottom picture is of a riot officer, nationality unknown, from the present now across France, as the Macron deep state puppet seeks to quell the growing, anti globalism protests. The modern picture just points to how dictatorships always turn out. The EUSSR is no more than the present day version of a failing, deep state construct that is the EUSSR.

For Heaven's sake they even have their modern version of Adolf as a speaker and unelected public face of the darkness from which he is controlled.


I suspect these histrionics are just an act. As with May, not a word can be believed. "No General Election", "No deal is better than a bad deal". The latter a blatant LIE. On and on they witter. All the time quietly and by their silences, condone Macron's, as they did Spain's suppression of the Catalans, actions across France.

The brutal suppression of the French protests is only making it ever greater. Despite EUSSR and their tame media lap dogs saying little about the French, what is tantamount to an uprising against the global and EUSSR borderline, for now, tyranny.

All the posing and posturing by May, her gross remain, in the main, Cabinet and Trojan remainers, like Leadsome, Gove and Fox, plus the great, 450 plus remain MPs, are all set to destroy delay our 29th of March departure from the dictatorship of Merkel's EUSSR fourth Reich.

The more leave supporters cry "Stop and set us free" the more vilification, nastiness and shouts of extremism are clamoured. As with the Nazis, the tactics to besmirch are in full swing. The next step is to justify, as Macron is doing, as was done to the Greeks and will spread across the whole Continent eventually, is a step into violent, vicious repression. "Just following orders".

So much for keeping the peace. The EUSSR failed to do that across the Balkans. That first conflict led to the first world war. That of the 1990s to a reshaping, for now, of a finely balanced standoff. That only after terrible atrocities on all sides and the useless, heavy handed approach of the EUSSR.

Behind all the faux genteel, media presented rosy EUSSR lies the probably already active across Europe, mixed nationality, riot police. Add to that the demands for greater integration, guaranteed by a proposed addition to the riot police, is that of an Army. Remember the remain campaign and Clegg's rebuttals? All of these plans are preparing for the full consequences of the Lisbon Treaty WE are still bound by. As we know, a whispered avoidance of mention.

So consider for one moment. The planned delay now being honed by the EUSSR, in cahoots with Oily Robbins and his treacherous civil service cabals, or the May deal that keeps us trapped, paying to dig our own graves and surrender to the global might of the deep state as of 2022 is all being set.

Bear in mind you need a colossal trap to snare 17, 442,747 leave voters. Such a construction of a bear pit seems to the elite and deep state quite feasible. Indeed I suspect regarded much as a "final solution". After all the leading power behind  all this are the very people whose forebears spent years discussing just such an enterprise. They and their allies such as Ukraine have form. As an afterthought, the EUSSR does rather love the Ukraine Establishment, do they not?

As for the Nazi picture above and the link to it, here's one more link to be fearful of repetition. The warnings are real.

Have a fun weekend!