More Humiliation For Molly, By Association, The Rest Of Us.

Boy was Bunty Boulton cross and miserable this morning. The Commissars "ganged up" on desperate, humbled and fibbing Molly. This leaving the dictatorship of the EUSSR means we get to lose the bullying. What the British  people voted for looks ever more likely. Leave, no huge  £39,000,000,000 we can't afford and freedom! Look at the deserved look of desperation and failure on her face.

What was also wonderful was Bunter in full, bad tempered rage when interviewing a true, proper Conservative MP telling, when he could get a word in edge ways, not to shout at him! Mark Francois was extremely patient with the incredible and loathsome rudeness and disrespect from the Fat Controller.

As for the media in general, now lumped with the Daily Fail, as ignorant and nasty remainer leftards, both Bunter Boulton's mood and that of the BBC cretins was very dark at the possibility of our actual leaving per se. Out, done with, finished and free. By that I mean the only option left is to dump Molly's deal and not put it before the traitors in Parliament. Molly, now seen as a joke even in the belly of the EUSSR, pisses off and we get a new, real brexit PM.

Of course the media biased,well paid for their treachery, lot won't admit the reality. The EUSSR is demanding, with menaces, we stay in this protection racket of unelected drunkards and plotters. This whole "backstop" is the kind of sewage slinging, fan stirring stuff these duplicitous scum always use. Pretend to be "negotiating" whilst their henchmen set the snares for the "innocents" or at best gullible, like Molly May.

Bunter had a Norwegian guy on who was so in favour of the UK just leaving with no deal they, Sky, screwed the sound, then just cut him of. So Gestapo like. Then they, the EUSSR placements and the media went into full project fear mode. Talk of another rigged referendum. The questions to be May's deal or remain". Sort of would the UK prefer a firing squad, hanging or the EUSSR's preferred option, disemboweling! Like the £39 billion is.

Let us look at how this should pan out based on honouring the 2016 vote. After two and a half years of expensive, one sided, fruitless, unnecessary yacking and back stabbing we are nowhere with the Commissars. Even the remainer MP club is not able to stomach the "deal" May signed and it should totally fail. We do not want a GE or a second, EU run, Oily Robbins rigged referendum. That latter stupidity, if not fiddled, would likely get a bigger leave majority and technically leave us where we are now.

So would extending or scrapping , in an act of utter crass and undemocratic suicide, Article 50. Therefore March the 29th would be a proper, democratic freedom day. Had this been done in 2016 we would have already settled down to a new, sensible, sovereign, global trading Nation. Any wrinkles ironed out. Bi-lateral deals done with, if that is what it would take, the EUSSR 27. Those not happy could also leave this Soviet Style Union in order to trade with us.

It's really time we played hardball with Berlin Brussels and do what the British electorate, in a massive turnout, if genuine and not loaded with votes originated from Brussels, voted for by a successful margin. Remainers, too, could do with a lecture on democracy instead of their faux nagging about leave voters. Since Parliament is hell bent on staying in this Cartel of crooks and poisonous, corrupt, German run fourth Reich, aided and abetted by a global deep state interference of immeasurable and to date, seemingly untouchable power over we little folk, we need a brexit PM. No more, no less, to see us leave for good.

I've just heard some snippets from Molly's press conference. What is she on? Spoke as though everything is tickety boo and this disgrace of a "deal" she witters on about is done and dusted. Just needs nodding through sometime, if ever. She giggled like a 17 year old virgin, all coy and seductive, in her own delusional borderline psychotic state, that Drunkard Juncker hadn't really called her "nebulous". It was ugly to hear and even more so to watch. She is more than ever, visibly a dead PM walking.

All her bluster and apparent steely resolve is nothing more than acting a part and gross stubborn and delusional ignorance. If she really, really cared about the British People and the United Kingdom, she would leave and let a genuine patriot take over. Then a Cabinet of like minded Ministers instead of this dreadful, inexperienced sell out leavers we are presently forced to endure.

As for Corbyn, he's just waiting for the stupid woman to fall into his trap and parade her "deal", in essence the EUSSR's diktat, lose it badly and allow a vote of confidence to remove this Government entirely. The behaviour of the EUSSR and Juncker and their laughing at Molly May suggests this is something already set up with Labour and Corbyn.

Once that's done, easy peasy if Labour got a majority. Or a coalition with the SNP and whoever else would sign up and there's plenty that would, to withdraw Article50. No referendum, no mention of those plots plans in a GE, just more lying manifesto platitudes and as little mention of brexit and Europe as possible. That subject would be explained away with "let's see how this election pans out" before that stuff can be addressed.

Naturally, Molly May would refresh her super glue on her backside and run on a "my deal" or remain ticket and get marmalised. Again. She's daft enough. Mind you, a Tory solid brexit leader promising a full, unadulterated and solid leave programme could do very well. If anybody, after May's treacherous sidekicks' lies, were able to be believed. One thing is for sure, it has dragged on interminably and makes our so called representatives, in the main, every bit as loathsome as May herself. We'll see but it is so demeaning and dispiriting as it drags on and on and on.

Where she belongs, I fear. 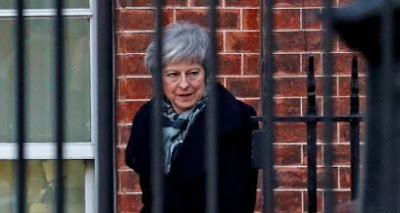