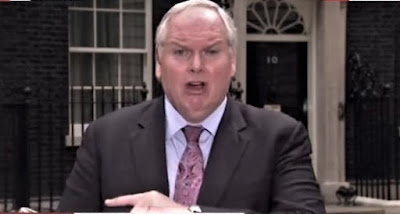 I pick on this guy but all of our media hacks are as bad as each other. This moron probably whingeing he wasn't consulted before the Tories decided enough is enough. I switched between the grossly biased BBC news and that inarticulate, unsophisticated leftard S. McGovern and her tame boy child then  this Bunter above. Remainers were fawned over relentlessly, the odd Leaver such as Bill Cash heckled and interrupted with sneers, lies and ill informed ignorance.

Bunter saying at one point this no confidence vote would be tomorrow as opposed to 2100 this evening. All of them, to a clown telling the viewers we are all ignorant cnuts. Our great, EUSSR besotted leader was the one person we should genuflect to and permit to enslave the UK temporarily until it was broken up by the Commissars from Berlin via Brussels.

I get a couple of hundred to sometimes 500 views per day. I'd trust 90% of any genuine people on my blog with running the Media or even the Country above any remainer traitors. Molly May among them. We have a chance now to get a Brexit PM and a Brexit Cabinet majority incumbency. Unlike the bunch today that have mostly remainers, or deserters. Like Fox and Leadsom. By all means have a handful of remainers for balance but not, as (I wonder why) Molly gathered around her. Ambitious and sycophantic lickspittles drunk on the trappings of power and the all expenses paid jaunts around Europe.

Bunter in full flow campaigning mode for Molly within moments of the no confidence vote. I thought he was going to punch Bill Cash at one point. His interruptions were not only effing rude they were ill informed rants being fed into his fat earlobe. McGovern little better. The media agenda switching project fear onto support and propaganda aimed at the Tory MPs voting this evening. Momentarily at sea as to how to pile the same garbage  over the viewers heads. A realisation that they have no time to brainwash the electorate to pressure their MPs.

However the MPs who see how dreadful this German dominated Fourth Reich, disguised as a fluffy democratic, benevolent enterprise is, now have a chance to be a "chosen few". For the second time in our history as a proud, independent Nation, we may have cause to be so many thanking so few. Just stop and think. A new Leader prepared to leave on the 29th of March, 2019. One prepared to say I represent 17,410,742 voters who voted to LEAVE the EU.

Not 17 million plus who voted for a " Molly May deal or any other "deal". JUST LEAVE. The ignorant losers incapable of abiding by the democratic vote have behaved disgracefully ever since the referendum. Sulking, nasty and whipped up by deep state millions of ill gotten dosh. No doubt a fair amount from the EUSSR. Many MPs in the vanguard of those who think democracy is a flawed ideology when not toeing their wiggly lines.

Look at the EUSSR's smugness over cajoling Molly into keeping her Molly House, the dubious bordello Molly houses always were. Neither one thing or another but for the gratification of the few, the privileged and the debauchery of the rich and powerful. Keith Vaz a latter day example. Cyril Smith another.

The UK turned into a refuge for gross abuse by the EUSSR's corrupt and incompetent drunks and failed bureaucrats.

If you managed the few minutes to watch and listen to the clip above, you should be now nervous or even scared of what is going on and Molly wants to hang onto all that awaiting her turn and hubby's longer at the trough. Never mind their hour by hour politics of fear shouted at us little folk who want to hang on to our freedom, these are the real ogres. The remain camp want this? Yes, because so many reckon to get personal wealth and power via this association with gangsters and gestapo cabals.

The Tory MPs who vote on Molly's mendacious instincts, , obfuscation, EUSSR learnt trickery, coaching and submissive genuflection to all things other than Britain and its generic lovers of freedom need to recognise one single fact. Ever since the UK was led with lies and disdain by the deep state, into a "Common Market" in 1975 we have suffered significant loss of sovereignty. The aim now, as we voted to leave, is to trap us into remaining but without any say, for ever.

Stuff the economy and the manure to be expected if we really quit on the 29th of March. Save £39 billion overnight. Then sort out trade, debts, from both sides and be free of this straight jacket  dictatorship. Free from its unelected power and deep state globalism of powerful corporate and gangster driven forces. All with a viscious nastiness towards any sense of morality or fairness.

Forces trafficking human beings into prostitution across the earth. Forces raping the planet's resources then conning people to pay for climate change pollution caused by the greed of the powerful sociopaths. Drunk with greed and insatiable with lust for dominance. Anybody now living in towns and cities across Europe and the USA can see the awfulness getting worse by the hour. Cultural savagery forgiven after centuries of disappearance in more enlightened times.

Two world wars were fought for the civilised ways of living we enjoyed until the globalists decided to squander it all for their dreams of dominance. We are in the Last Chance Saloon. How can so many not see this? A vote to keep Molly in power is an endorsement of the grooming gangs, the child abuse entailed and a vote to enslave the people of these Islands. What more is there to be said. God help us all if she (pun alert) remains. God help us all if we don't leave and leave without strings attached. Damocles swords forever over all our heads.