Molly May Is Mad And Very, Very, Bad.

A Shameful, Unedifying Disgrace Of A Human Being. 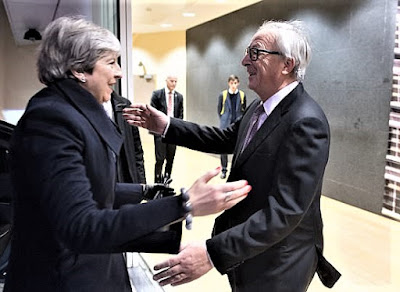 If Woody Allen's twin brother can tear himself away from amassing millions and millions of quid for him and his dreadful, shameless, greedy and delusional spouse, he might fell a tweak of concern at these two plotters above and their "Strictly" walz routines on the European stage. After all it is said likes attract. For sure I can't see many folk taking to either of these scheming, devious and very unpleasant pair of conspirators and shysters.

I was travelling p.m yesterday and out socialising that evening. Then staying overnight with Mrs OR at a friend's home. My last snippet from that bubbling, now fetid cess pit this woman has made our Parliament, with much assistance from Juncker and the EUSSR Commissars, was, as I understood it, a possibility her delay of today's "meaningless shite vote" could be voted down and her vote overwhelmingly go against her as forecast. Thereafter she be thrown out, if not by a Cromwellian figure, at least somebody recognisable as having more than an empty sac of testicles than most of them.

I listened on the car radio to Molly's performance. Virtually word for word the same crap she spouted a week ago. Full of threats of a "no brexit" if her cobbled together slavery deal was not voted through. Her mendacity was in full cry. If ever there could be any doubt she's gone round the bend, yesterday left no chance at all of her sanity still intact.

Do not forget the Ted Heath campaign to join the Federal United States of Europe. That took 30 years or decades to be revealed for the collusion, lies and underhand strategies used to dupe MPs, the Public and their pets into a common market. One common only in its universal power grab of once proud Nations. Well that mincing deviant was the antithesis of Cyril Smith. Molly more similar in her abuse of power and influence over her citizens so like Smith's over his victims.

I cannot be sure if her last minute cancellation of today's vote was forced on her. I consider she knew exactly what she was doing. I suspect Oily Robbins was busy greasing her puppet strings deep into the night of Sunday. The grease supplied by those evil bastards over the other side of our moat, known as the English Channel. Well, for the time being before it's renamed the "Traitors' Channel Crossing".

Whatever yesterday was really about, few outside the secret meeting rooms and secure video links, shared by a select few unelected Commissars and Oily Robbins, were privy to the real plotting.Molly probably waiting outside until summoned to be coached on her next round of disgraceful, accomplished lies. The hooker turned madame, now too old to do the upfront seduction and prostitution of her morality and her Country's sell out.

As for MPs. Spineless, frit and easily bullied into submission because, for most of them, the beatings at the hands of the EUSSR is pleasurable, the pain exquisite the future more of the same in return for pieces of silver and delusions of grandeur.

To call what's going on a farce is stupid. A farce is usually not totally devoid of the odd wry smile. However being abused by these faceless bureaucrats and nasty, Merkle controlled, scum drenched unelected, led by an addled drunkard, cretinous, puffed up little failures is beyond belief. That this EUSSR can survive, under such a weight of self entitled incompetence and has beens, is surely doomed?

FFS, Molly said the "meaningless vote" would go ahead today, come what may. Now, bugger losing my lovely and powerful sinecure, handily putting millions in Hubby's and my bank accounts offshore, we''ll have a pre-Christmas jaunt across Europe. Leave the kids behind to squabble whilst I pretend to have got a hefty concession to that agreement I signed last week. Then forget it all until late January or even int mid February.

By then project fear will be in full swing. Hammy Hammond will have trashed the economy, The Nazis in Brussels will have dragged up more nightmare scenarios and loathing that the Brits dared to have crossed them and voted leave. German EU Minister says what they want is Britain not to leave. Well who ever thought that?

Monday morning's ECJ ruling, conveniently timed for 0900GMT, to salivate the UK's media clowns, was some coincidence as well. Bit iffy mind you in reminding many of us more intelligent leaver aficionados of who are really our rulers,. However I digress.

Molly has closed her brothel, represented by the Houses of Parliament and done the one thing she's really good at. Not kicked the can done the road. More the whole oil drum of democracy. If she says there'll be a vote by the 21/01/2019 then there will not. This creature is utterly incapable of opening her mouth and speaking the truth. With a nod to Cromwell's words, " A Prime Minister you cannot get rid of is worse than an EU President you cannot get rid of".

Over two and half years this ghastly woman has shillied and shallied, spouted lies as truth, spouted mendacity as morality" and is a disgrace beyond measure. If only she could be got rid of before Christmas and a solid Brexiteer  take over to guide us through a WTO clean exit. Dear Lord, a Corbyn led destruction of our economy is better than that Woman's deal with, not strings but shackles. where are heroes when you desperately need them? Not in Parliament it seems.