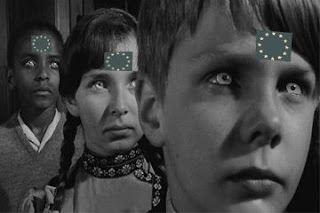 I'm crock with a bug just now. So in between kipping I'm following more than usual, news broadcasts. What a joke they are. The criticisms of RT Russian utterances is pathetic alongside our tsunami of anti the people, pro the global deep state elite horror.

Look, too, at the silence over the slaughter  and  dismemberment of Khashoggi, by the Saudis. Compare the coverage, minus evidence, of the Skripal furore.  How badly we are served. No more so than over Brexit.

A second by second of remain morons. Bliar but one of the self interested scum of so many. Add the violent suppression by masked Gestapo troops of the EUSSR across France and the brutal beatings in Brussels, when the people showed their disgust outside the HQ of this corrupt monolith, evil EU.

As for a second referendum. So EUSSR now obvious, anti democratic tactics. A "peoples" vote my arse. Who voted in 2016? 17,410,742 imported baboons? If it was, those dear creatures are worth more than 10 times the remain Establishment.

Still, project fear didn't work in 2016. Quite the opposite. Indeed the bullying became an asset to we leave voters. I suspect that's even more the case today. Indeed, the real EUSSR fear is how successful we will become and the billions they are set, justifiably, to forego. Bring it on March 29th.
Posted by Oldrightie at 13:16