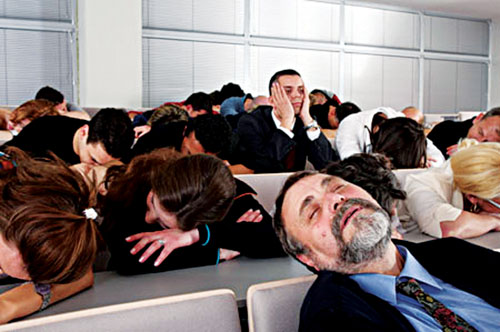 For me and I suspect many, many millions of Brits, this year's Party gatherings, with one notable exception, must be the most boring in my lifetime. The communist  Labour Party and Grandadad "Stalin" with their "for the many (us) not the few, (the rest of us)" rubbish and the Tories "Opportunity" banners. Give me strength. All of them pissed on all of us ever since WW2. The financial crash of 2008, a failure which should have swept thousands of politicians, (un) civil servants and corporate thieves from office a distant memory.

As ever, the conferences drone on as if yesterday's useless morons had been just a bit unlucky in making us all joyful, rich, multiculturally enriched and happy as can be. The dreadful wars, Common Purpose enslavement and the ever growing menace of the EUSSR dictatorship all forgotten. The gross, ugly, gurning faces urged on by off stage legions of prompters. The huddling of attendees to the front of vast, empty venues all conspire to the groundhog experience for the public.

As for reality, please spare me that notion. The dominance of a "remain" and full diseased ridden media sycophants, to all things Common Purpose, continues its faux interest whilst chafing at the bit to get to the late night parties, orgies and drug fuelled entertainments. Not for one moment is their any sense of the serious flaws and potentially lethal consequences of this annual jamboree merry-go-round. An NHS beyond coping with millions of immigrants, an education system likewise. A tired, pot hole ridden infrastructure and transport chaos. The true causes of our nightmare Nation now subsumed into a rapidly declining offshore dumping ground for Europe.

So many never ending terrible issues only changing in their rate of decline increase and not a year going by with any positive, good news. Unlike that brief burst of flame and hope was the vote to leave the EU. a flame now barely a tiny glow or ember. Trampled on by a hidden monster of global power now controlling our very thoughts, let alone actions.

This Brexit farce just another vehicle with which, as in Heath's time and our "Common Market" debate was a pack of lies.. One which, then as now, was mired in obfuscation, manufactured complexity and victory through boredom of the people. That one spark of deep interest could have been created, if the truth had been known publicly, of a real desire for a new EUSSR Statehood, was something not to be shared by the then establishment gangsters and liars.

A second analogy can also be introduced. The years leading up to the second world war. Appeasement and the rescuing of the wealthy and self interested, before the Nation and sovereignty. Then as now, that very self same self interest, today a global and more extensive hegemony, sought to vilify and belittle all less enthusiastic to surrender to the Nazi jackboot and bullying. Ring any bells?

As for these party Conferences. The hilarity of their childish enthusiasm, old, cliché ridden slogans and sound bite attempts, are borderline pathetic. Labour and their belief we are ready for a Stalinist era of draconian, single ideology and internment camps for opposing views. A ludicrous, 1950s stance matched only by May's gurning and writhing subservience to Blairism and "all things to all men" (and women of course). A fitting successor to Cameron's infatuation with Blair.

Then there are the LibDums. I haven't mentioned those folk since as far as I can tell they didn't bother with a conference this year! I think Vince cable just held a meeting with a few tame journalists and saved a fortune for his party Leader's retirement chest. As for UKIP, a brief flirtation with The For Britain Manifesto, quickly dropped under an organised but minor press mugging and that was that.

So after this week the season of groundhog fondling will be over for another 12 months. What will remain is the final coup de grace of Brexit. This Chequers formula will be magically adopted at the last minute. Its real awfulness and pretence will unfold over a few years just as that dreadful confidence trick that was the "Common Market". May's duplicitous language, her treason and sell out will grow in understand as did heath's. All will be too late, of course.

We will be saddled with billions of subscriptions, trade barriers, rules and regulations, all without one iota of say on our levied burdens. We'll be paying for prime beef and getting Halal, multi carcass derived, mince. Freedom of movement will be camouflaged with some kind of pan UK Irish question cobbled up clever dick "treaty" and all will be as is now. Except all rebates, decision making contributions and voting rights at the top table will be gone.

The eventual outcome will be as already planned. An acceptance of our being hard done by. A need to rescue, a la Greece, a poverty riven Nation on its knees. Its wealth pillaged to nurture France and Germany as well as teach other countries not to mess with the Fourth Reich or even expect a Marshal Petain style Government. We shall be taken back under the wing of the totalitarian ambition. The long game reaching its conclusion. Our broken currency quickly replaced with a euro mired in a history of criminal money laundering and as blood soaked as ever any deutschmarks from the past.

Sit back and consider this near future. No more England, Scotland, Wales or Northern Ireland. No British Army, Navy or Air Force. Just a very large European Military and quasi military police force. Thought Police will patrol our streets and countryside to enforce pan European sharia diktats alongside EUSSR despotic pronunciations. hell on earth for any who love freedom and what will be a distant ideology of democracy.

The only slight upside is there will no longer be party conferences and our enslavement will be final. After all who needs humanity, decency and Christian values? They are already in such short supply, though still, just, able to be found. Treasure them where you can for they'll soon be gone and boredom no longer an option. Superseded by a desperate need to survive. Just read your "Animal Farm" and "1984", kids. That is if all the copies haven't been burnt or wiped off the INTERNET!