WTF Are They About? 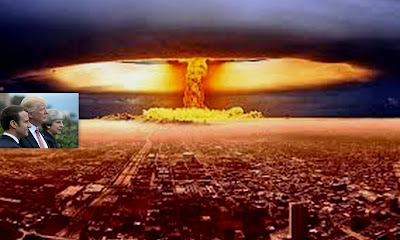 "That's Syria sorted, who's next? Iran, I guess.

Who really are the animals. How can they spout the shit and drivel such as Trump and May just have.   The stupid, ghastly idiots, full of evil, lies and hidden agenda. May, nervous, looking down and to the left and so obviously aware what a gross piece of criminal and terrible crap she's just excreted. Is the obsessive deep state stooping to this level of flagrant breaches of international law that makes Adolf look to have been a reasonable guy, aware of their idiocy?

I watched "darkest Hour" last night with pride and sheer admiration as to Churchill's inbred statesman like brilliance. Only to wake this morning to the complete opposite. Oh the irony. The one figure, so far, showing restraint and decency is Putin. Our last hope to live long enough to not witness the eventual nuclear holocaust and disappearance of the human race, these cretinous and selfish narcissists will for sure, if not not already, instigate.

Fairy stories and made up bollocks now sufficient to rain down on innocent civilians and their once beautiful Damascus, missiles and hell, without one ounce of diplomacy or logic. Their own tame muppets at the OPCW, a  la Dr. David Kelly,  told them Assad had destroyed his chemical weapons sites. Unlike our lot across America and in Porton Down. This same body about to reveal the lies and fake, badly done efforts by the CIA's remaining butcher pals in East Ghouta to give an excuse for this Armageddon rehearsal.

Cruella May clinging to the Skripal unproven and highly dubious Salisbury incident. Note the disappearance of the victims who so inconveniently survived. Note the anti Russian rhetoric by the sore losers in the deep state redoubt of the Clinton's dismal campaign. One as mirrored by Cruella May's gross and puerile UK one. People now egging on any scenario to recover lost ground. Any pretense of legality or morality, chucked into the deepest parts of their swamp.

Cruella claiming, with absolute zero logic, they have bombed Assad's chemical weapons installations. Yup, you moron, places, if full of this stuff, you know the instant and highly toxic fatal doses the size of a pinhead, going to release clouds and millions of pinhead droplets across millions of innocents. Far more, exponentially than the poor old Skripal victims. Some say three, others four.

As for chemical weaponry. Just remind me who supplied Saddam Hussein for use against Iran and his own Kurdish population? Who soaked Vietnam in napalm? Remember this imagery and proof of your American friends' morality, Mrs Cruella, (who needs Parliamentary debate or public approval). Indeed where's the outcry over Saudi human rights record and the ongoing slaughter of innocents in Yemen? As for protecting us all. If you are so wonderful, Cruella, how about the swamp of your and previous governments' lackadaisical, even laissez faire, approach to child sex abuse by Asian grooming gangs happening every second of every day. That and your reckless, Brexit stopping motives, probably, military attack on a sovereign state is a glaring hypocrisy worthy of any depravity exercised by the Nazis.

I pondered if my last post might be the last, well last evening was another small step for despots of the western deep state allied to Common Purpose. A large step towards the annihilation of the human race. As for conservation, pollution and austerity, all blown up in a night of ferocious, gross warfare likely to benefit absolutely not a damned living creature. Bat the fools who think they are superior and more "exceptional" than the rest. Trump sure is exceptional. His delusion, hubris and unintelligent existence a great disappointment to the tired and battered nation who chose the less of two very great evils. Only to see there's not a whisker between them.

As for shame, that, for we little folk left to suffer. My heart goes out to the people of Syria, so close to a a sort of peace, now facing the possible fate of becoming the epicentre of a nuclear winter. Our only satisfaction is those set to unleash an even greater military, macho bombardment, will be as vulnerable to the consequences, like the rest of us. Utter, unimaginable and grotesque people, very completely immersed in, at least the West, of lunatics running the asylum.

I doubt my little blog figures in the workload of our spooks but should it do so. They, too, should be ashamed at their coverups, hiding of the truth and doing their incompetent masters bidding without one shred of decency of morality. Indeed Japanese knot weed in their growth and if there is a future, a secret police destiny to match anything yet seen in history.