How Awful Our Parliament has Become.

A True Circus Of Talentless Morons. 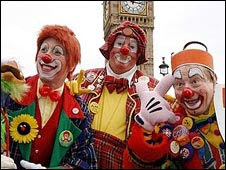 I am at a loss to understand how infantile, stupid, moronic, gullible and unfit for Office our MPs, in the main, have become. I assume they have had too easy a ride, these past decades, as most legislation and edict has been allowed to become the preserve of those gangsters masquerading under the name of EUSSR Commissioners. Any hint of sovereign interest quickly slapped down by the undercover agents of the EUSSR, senior civil masters servants.

As Telford is added to the list of gross, savage and racist misogyny, beloved of Islamists and their passionate need to rape children too poorly served by their own to fight back, we get this almost certainly manufactured outrage against Russia. One State not letting the hordes of fanaticism and murderous intent roll all over them.

I cannot ever hope to match Dr. North's intellectual and literary talents but can pass on his superb analysis for those with a reasoning and sounder mind. Many, myself included, beg the question, why now? Skirpal was old hat. His daughter presumably collateral damage for whoever, if anyone, attacked them.

However we look at the incident it's hard to follow how those involved were so obviously incompetent. Whatever, it has pushed Brexit and Asian, Islamic barbarity and abuse of many thousands of children on a daily basis off the tame media propaganda ridden pages. I loathe everything Cob Corbyn stands for, so imagine my disgust at our Parliament when Corbyn's spokesman is the only voice for common sense on the Skirpal matter.

The knee jerk reaction and weak, puerile posturing by May against Russia has to be some pathetic attempt to look strong and purposeful. Given the weak and half hearted EUSSR performance her belief rusty, ancient sabre rattling and bear baiting is the way to go shows up her easily swayed immaturity for high office.

That she quietly backs the Merkel approach to total surrender to the might of mass, criminally led, immigration across Europe looks ever more likely. Add the alacrity we appear to be already surrendering our future fishing harvests and who knows what else in a pretend brexit and the scandal begun over many months since.

The unholy alliance of deep state "friends". Is it hard to accept, when Skirpal's attack is shown as a given by Russia, with far less evidence, that this police infiltration is partly why child grooming gangs operate with such impunity? Or why the west's intelligence agencies are so very wealthy? All questions to be answered or ignored, if we can cook up a distraction. What future awaits the kids of today and their millennium snowflake parents? A probable desire to migrate en masse to Russia is my bet!

Joking apart, best left to what passes for "Government" to provide the humour. It really is a case of yo may as well laugh as cry. I have tried so hard to give May the benefit of the doubt. In this Skirpal scenario she has lost all credibility. Somehow the macho posturing fits even less well on a woman than a man. Although she "welcomes and enquiry" into the now diminished phrase "child sex abuse" to "CSE". Sleight of hand there, you see.

This utter excuse for a human being whinges on about and disputes the numbers. There was a day when ONE such savage and brutal destruction of a young life would have been headline news.As for this man's shifty, downward looking glance to the left, often seen as that of someone with a lie or guilt to hide, you judge. Think of the Berlin corruption of police and one really has to ask our members of Parliament and the Prime Minister where they have been these past 40 years plus. Disney Land I suppose. Or the travelling circus.

Moronic fools, good for nothing, bear baiting pygmies. As loathsome as the immigrant culture they have brought down on thousands of innocent young kids. Handy all round this "Russian" act of war on EUSSR sorry, pretend British soil. Devoid of pride and awash with self inflicted depravity, Mrs May and your cohorts across the political spectrum and civil service are the guilty ones. Nor Russia. Westmonster indeed.