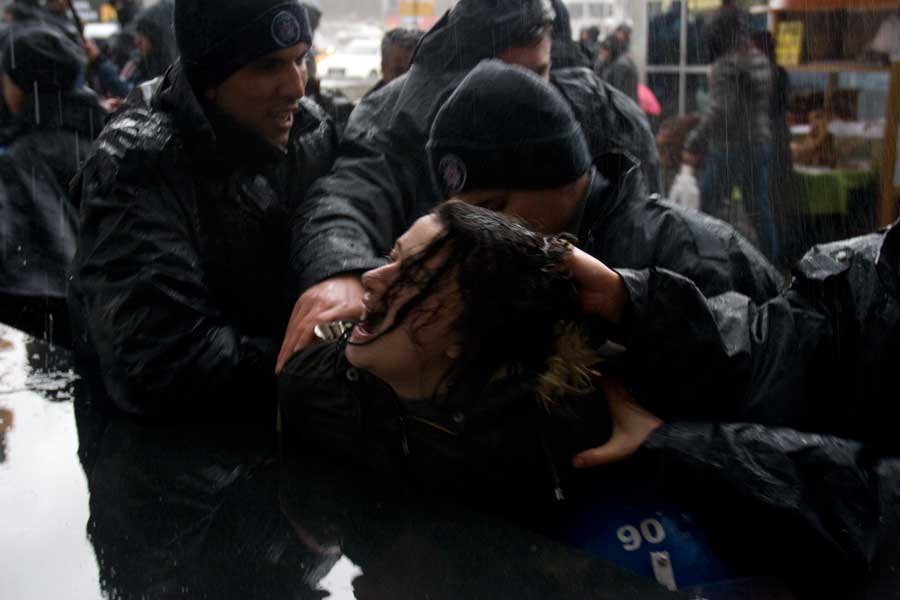 How Erdogan treats any dissent.

The deep state  appears to have swallowed it's own ejaculations and probably bankrolled Berlusconi in order to thwart the rise of anti Establishment, justifiable anger. Albeit anything now not able to be labelled racism is called with the same spiteful, media mantra, populism. Surely if democracy is based on the will and vote of the majority, then the most popular candidates must, by definition, be populist success?

However, we are very far down the prescient work of George Orwell, where language is the purview of the powerful and the Big Brother, known today as the "Deep State". "Newspeak" was so described in the novel as the language of The Established Socialist terror in 1949. Spookily accurate if somewhat later in existence than 1984. Traitor Cob the perfect manifestation of the malevolent, cruel and brutal Big Brother.

"Newspeak", particularly in the West and very much so in the gross dictatorship of Turkey, is not only ghastly in its tone and fiction but in the smug, horrible presentation. Presentation by legions of tame, lick spittle arse licking cretins, so thick they can't see their obscene salaries and petty celebrity status is supplied from the gut wrenching misery and blood of those deemed the enemies of their career ambitions.

Look at the totally blank hypocrisy spewed forth. The flattening of Mosul, the horrors of Raqqa and the three monkeys approach to Yemen. If we then consider the racist brutality now taking place and the butchery by black savagery in South Africa and the racism of black on white genocide.  Africa,shows the pattern of modern, 21st century "Newspeak" so glaringly in our faces. If only by the blind eye of the unreporting of inconvenient truths.

The depth of this dreadful nightmare all around us is getting more prevalent by the day. Sweden a Nation now under the most brutal, ignorant and uncivilised grip of evil so unimaginable yet barely ever reported unless "Newspeak" can put their "everything Islamic is perfect" slant on it. Their favourite take is that somehow white people are deserving of these cruel and medieval occupations. So little of the state we are drowning under ever reported.

In all of these repugnant matters, we are kept informed only of that which is designed to cower and subjugate all of us daring to express our disgust at those like Momentum and Cob the Commie. They more obvious tools of the deep State. An Establishment of MPs and civil servants all embedded in corruption, murder, filth and slimy depravity. People like May wedded to their own undeserved status with zero concern for their fellow citizens and the state of our rapid descent into a multi cultural Sodom and Gomorrah.

The UK's once green and pleasant land now to be sacrificed to ever more millions of slums to house the mass migration which is already leading to the kind of savagery once the preserve of the African and South American Nations and dictators. Yet now infecting everything we once held decent and beautiful. The racists are very dominant across Europe. Millions of them and a large majority are not white. Regardless of what this gross excuse of a human being, Abbott, cares to spew forth this video offers significant evidence. Fascinating look at the subject.

I loathe racism but will not accept that resentment is racist at all. Savage cruelty and violence knows no such demarcation, does it?

Finally, note how the Oscars are dominating the BBC "Newspeak". The Italian election and its rejection of all things EUSSR must not be debated or mentioned. Please...................