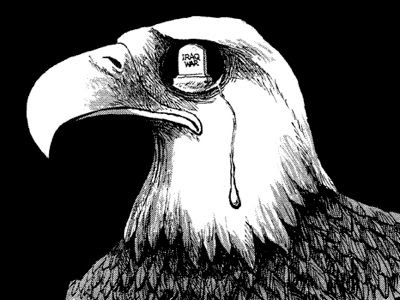 Love or hate Russia and RT.com for Oldrightie they have, in the modern world, a more acceptable ability to act in the name of the  many not the few. The American Corporate might, like their drug addicted military, is waning. The deep State beloved of Goldman Sachs, the Clintons and their coteries of hangers on, Soros funded morons, are losing the moral high ground, or hillock they once believed they stood thereon.

That they dare, brazenly and illegally, to say they will continue their occupation of Syrian territory, fomenting violence over diplomacy, is sickening. In order to do this they cite support of Kurdish ambitions. Unlike the same antipathy they offer to Iraqi Kurdish hopes. Such unedifying hypocrisy. All in the name of our declining wealth and dreams in the West.

Further hints at a global realignment and a dissatisfaction with the decades old "deep state" failure of the American corporate and banking evolved despots can be put alongside the recent Russo-Saudi meetings. Putin seemingly more intent than the American "deep state" mafia like warmongers. Slowly being condemned to a futile and embarrassing further defeat and withdrawal from Afghanistan. Interesting how that country's name rhymes with Vietnam.

One thing is for sure, they have, America and the puppets in Europe and the UK, have more to gain from a diplomatic and sensible rapport with Russia today. Pun intended! With Putin's legally endorsed assistance to Assad and the majority of grateful Syrian people facing the beautiful coming chance of peace, American interference looks evermore desperate and unpleasant.

With Iran on board, the Saudis now talking to the Israelis and in touch with Russia, there sure looks some fascinating and potentially peace bringing alliances on the horizon. As someone once said, "more jaw, less war" may yet win the day. Not good for the arms dealers of the West, however. have a great weekend. Especially as Mrs Merkel's European rule looks to be ended!

One last matter. I did think the sentience vote in the Commons last Monday was some meddling mischief by the "opposition". Seems it may well have been according the response to the uplifting, if unnecessary backlash, shown to have been today.