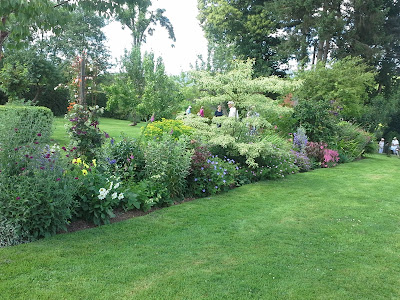 Mrs OR held her, probably, last, NGS open day last Sunday in weather that could not have been better. Notwithstanding I have harangued our cossetted and billion pound wasters at the Met Office for never forecasting this until late on Saturday. Albeit virtually every other non tax payer liability sites did. Really not good enough. Too much reliance on "computer knows best". Still I digress.

However our effort and hard work for the event and some £1100 worth of money to charity, was rewarding. The picture above of visitors in the orchard garden area. Mind you, in terms of genuine effort on behalf of others and genuine altruism the day encapsulated the essence of a rapidly fading England of yore. One already expunged by our political class from certainly London and most, if not all our major cities.

What I find disgusting is the manner every single MP that has betrayed our hard won values and National pride, including virtually all of them today, of every hue, who show zero remorse for the present and developed, indeed encouraged, descent into a multi cultural hell and mediocrity. As for their "working hours" just a self important, self promoting fest of hubris. At least for a big majority of them. Of the few I have time for, Mrs May is one, warts and all. She is as honest as Commie Corbyn is deceitful, mendacious and unpleasant. This but one example.

The Parliament will soon  swan off from the 20th of July until the 5th of September. 10 days back they sod off again for the dreaded media overkill that are the conferences, for almost another whole month. Add to this no Queen's speech for two years, (good), we have the likelihood of a pause in the endless, often pointless, legislation to pretend they make a difference to our lives.

If they made a positive contribution, fine. Yet as our cities begin to follow Frankfurt down this atrocious route, London very close I can't see one reason to think we are better off as a Nation in my lifetime. Yet the political class appear oblivious to the awfulness they have wreaked. All we get is infighting over who can best exploit the mess to gain electoral advantage.

Post the last unexpected election, fraud not withstanding, it would appear Corbyn won that squabble over the immigrant vote, gerrymandered through mass immigration, mostly by them, for that reason. However the outcome still remains the utter wastelands our urban jungles have become. Huge crime waves of drug war exacerbated violence, mass rape of mostly white children, an under, under class of surly youths, feral and nasty.

The overwhelming crush on our services, education a joke for many, the NHS unable to cope with millions of illegal demands. Tower blocks packed to the gunnels with sub lets, unknown illegal aliens and now a cult figure promising wealth for all but the few who just might earn it.

How our Parliamentarians sleep at night with this as their legacy for their supposed hard work which in reality is a nightmare failure but of little consequence to their own well paid sinecures and pension awards. Note the few abstentions when voting themselves huge pay and "expenses" awards. The scramble to the trough unedifying when so many are traduced. Still, we do get a few weeks of rest from their dead hands of incompetence and unaccountability. For that small mercy we should be grateful.

One last bit of fun. Juncker sulked and stomped his foot today. A petulant spat in the EUSSR "Parliament" a sign of their deep down angst at the loss of the UK and the domino pack being unwrapped by the pressure surging over the immigrant crisis and the rapidly failing economies throughout Europe. It's likely to be a long hot summer of much discontent. I've ordered popcorn and cold superb 1985 Herefordshire lager. As magnificent as Chase Vodka!


Here is a bit of fun but a serious sign of a crumbling edifice and lazy reps.

From a UK point of view, the Maltese Presidency was unpleasant, so deserving of this cold shoulder. As is Juncker.
Posted by Oldrightie at 20:02