What Was The Question? 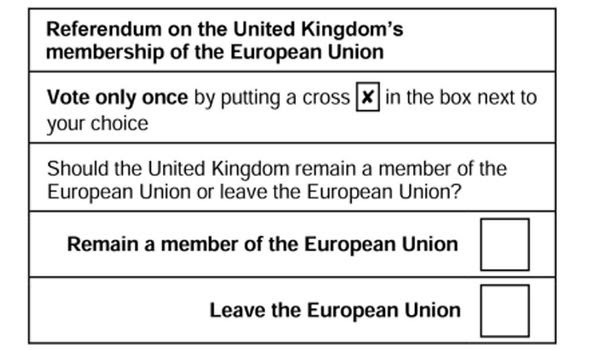 Now take a deep breath. The result was, leave, 17,410,742, remain, 16,141,241. 3.8% majority to leave. In a true democracy one vote more to leave than remain wins. However, for the thick turds like Flabbot for whom democracy and numeracy are both a mystery, 1,269,501 more voted to leave this Common Purpose, Third Reich dictatorship.

This majority won a referendum steeped in a constant barrage of threats, doom laden mongering and an Establishment riddled with self interest, fraudulent payoffs and bribery.
The BBC paid millions to promote the EUSSR agenda, purely coincidental timing. As for Murdoch, is this a reason for impartiality?

I could go on about the huge salaries' siren songs from Brussels to our civil servants. I suspect this was part of the drag anchor by the Establishment. Then we have a house of Lording it Over us stuffed to the gunnels by oh so reluctant millionaire leftards. Mandlescum, Kinnock, Heseltine and so on. No doubt weeping willow Clegg soon to add to our National, limitless purse of undeserving recipients. Legions of placements for this very eventuality and the need to kill off democratic will of the people.

The sooner that lot over overfed, over privileged, puff balls of self entitlement is culled the better. Dear God the hereditary days of well bred, in the main, selfless patriots were significantly better qualified to look over the shoulders of the "other lot" than this now bought and paid for, undeserving hypocrites. I would ask them to read up on democracy then look long and hard at that ballot paper.

I really fear for this EUSSR knack of almost subtle nastiness. You only need, however to look at the cretins such as Tusk and Juncker to realise how very necessary it is we really do leave. Those who say no deal is better than a bad deal are spot on. Churchill felt the same about that note of Chamberlain's. One eerily similar to Camoron's "deal" with the EUSSR, wasn't it.

Now come to just over a year or so back. Eerily similar.


Listen to those "agreements" all of them later said by EUSSR apparatchiks would actually not be, as Ed Milibad would say, carved in stone. Had we voted remain the rebate, euro et al would have been a goer, big time. We can but hope leave really, really will mean leave. I am having my doubts. Especially while that smug bar steward and mega rich Hammond is on the scene. If we keep and perhaps we should, Tessa, at least dump this wannabe next Juncker successor, please.

Have a great weekend.