I Am Not A Pacifist. If ever a picture sums up how Western hypocrisy trumps all else, pun intended, the one above tells us in no uncertain way. A cross, church setting and a figure whose morality dwarfs anything any Mafia Don could ever consider. Notwithstanding the Irish question, still unresolved, the imagery is about everything that reeks throughout out our Establishment and their convenient morals.

Yemen and Iraq are ablaze and awash with petrol poured on the flames in lieu of water based diplomacy. Indeed the Middle East a mecca for violence, barbaric killing and futile, tribal evil. Much of it all brought about by an arms industry for whom peace is an anathema. Whilst innocents at the centre of the carnage pay with suffering and painful injury and death, we mugs, so far, just pay with our wealth and taxes.

In 2016 a very faint glimmer of hope came about with anti Establishment dictatorship seemingly kicked in the groin twice. Chump, as he now appears, and Brexit. A few months on both look non entities. The main players discredited and Boris Johnson looking every bit the immature oaf he's long been portrayed. As for May, again a promising start contaminated by the Chinese whisperers of Whitehall.

As many are saying but going unheard, the choice in Syria is between Assad of ISIS. Despite the horrors of these Islamic butchers, there for all to see, the joyous relief of those freed from their grip in Aleppo, unlike those still trapped and being slaughtered in Mosul, Western greed and Saudi pipe line requirements demand all the bloodshed necessary to satisfy its needs. Not one shred of unbiased evidence has been made available as to what happened in Khan Sheikhoun.

Calls by Russia to mount an independent inquiry fall on deaf ears. The suggestion that they hit a terrorist weapons installation poo-poohed. Absolutely no effort to conduct a reasonable discussion entertained. Suddenly Trump becomes Presidential. So for an arms led Western economic philosophy truth really is irrelevant. When I agree with this guy I know how lost are our erstwhile leaders.

Boris Johnson cancels an opportunity to go face to face with those he accuses, like a petulant schoolboy.  Not a Foreign Secretary of any credibility is he? As for the rush to suddenly fall at Chump's feet, there's that hypocrisy again. All it's so far cost Chump is $93,810,000. Well cost the American people and for what? Not least it's at the price of any shred of diplomatic credibility in my book.

No matter what the media disgorge and vomit at us endlessly we are in a dreadful, dark place in The West. Christian values long discarded and meddling, bloody and greed filled, grasping interventionism now the preferred international action. Any hope of a rapprochement with Putin and Russia ignored.

I suspect the Pentagon and their sidekicks in the CIA are plotting their next attempt to destabilise Russia after failing to score with Ukraine. Chump looked a stumbling block but has now signed up totally to the cause of American Corporate dominance of the whole planet. ISIS helping them nicely to use any means they care to choose in the name of "homeland security".

As for the evidence of their stupidity, just think of the almost daily massacre of innocents. Not only in their stoked up wars and conflicts but on the streets of many major cities now virtually occupied by the deserters refugees from the battlefields that once were havens in the Middle East. 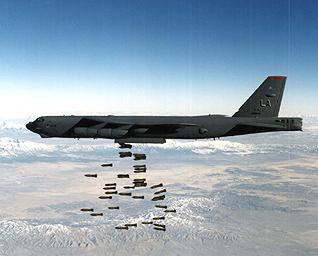 Bringing peace to all.

As for the use of chemicals in war, remember this?

Still, never mind. If they do set off a nuclear holocaust, many of these cretins will, for once, suffer themselves. Once the food and water runs out in their bunkers, of course.