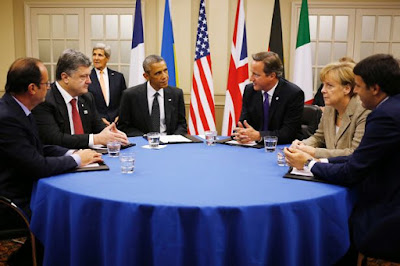 I don't know when this image above was taken but since "Call me Dave" is reported to be sniffing around a NATO top job is seems reasonable to include the guy in this rant. Notwithstanding the bewigged rug wearer in the background is shortly to become a yesterday man too.

As we approach the inauguration of President Elect Trump, the sore losers of the Obummer Sycophantic Battalions are showing their credentials as the real enemies of all we hold dear. Not least that gross character, wannabee World President Supreme and owner of most of us, George Soros.

These days leading up to what, regardless of the individual to be inaugurated, should be a solemn display of democracy in action, is being turned into a grump fest of ignorance and stupidity by the vats of sour grapes vomited forth by these awful fools. Not least, as The President Elect made clear, "another beauty", when they attempted to ask some banal and for them,, excitingly negative question so beloved of the smug but discredited BBC.

The Buzzfeed almost solidly a spoof full of clues and hints as to its lack of any efficacy, was paraded triumphantly by the rubbish Establishment following the vindictive and childish words and actions by Obummer and his inner circle of equally ghastly warmongers. I assume that their toilet paper is impregnated with Russian hacker material and miniature cameras along with their measuring the volumes of excrement they so readily make available to the big wide world. A world coveted so desperately by western arms dealers, corporations and self interested greed.

A world that has easily bought the leftards of the western media. One minute they are trumpeting (intended) Labour and socialism to the skies, next minute vilifying and traducing Putin and Russia despite their, Russia's, powerful claim to a fairer socialist society than ever any EUSSR puppet of Washington, The UK included can own to have created.

How Obummer and the other defendants of regime change, bloodthirsty interventions in The Middle East and Ukraine can strut a manufactured moral high ground and seek to exile any effort at a sensible, safer rapprochement with Russia, is beyond me bar one gross element. Cash and the currency of power through vast hoarding of wealth by a select few.

Our so called "friends" are a cabal of gangsters, bent politicians and bullying corporations, all patrolled by minders and placements at the political level. Take this arrogance of self entitlement and the consequences to freedom and democratic scenarios. Then the election of President Elect Trump and Brexit can be viewed for the enormous fight back by ordinary folk against a seedy society they are. As the lying and doctored nastiness and spin gets ever more hysterical a report today suggested Trump is even more popular for his so refreshing and wise determination in his press conference of who are really friends and the vast number who are more dangerous and nasty than anything Putin or Russia can be accused of.

As my post header begins, "with friends like these", The Clintons, Merkels, Hollandes and the EUSSR Commissioners, to name but a few, plus bankers and the Soros types, who needs enemies? Certainly not ones as powerful as Putin, Russia and China. If our lot made more effort to see the dangers ISIS and North Korea provide, plus other factions now embedded throughout European societies, then we could start to forgive their treachery, greed and blood lust. I'm not holding my breath.