When The Cosy become Disturbed.

They Lost Balls, Then The Plot! 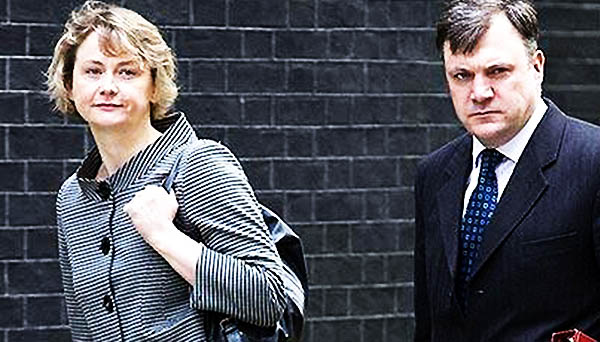 Isn't it strange how people like Balls do that Macbeth "stage strutting" stuff and then are heard no more! Well that is until they become to be regarded by the ridiculous media as "big beasts". Just as remarkable is how their once daily lecturing and haranguing and meddling in our lives is also soon forgotten.

At least unless their failure is even greater than most. Like Snot Picker Gordo and his destruction of the UK's pension funds. Given that expense manipulator Testes and his Pixie Mrs took us all for hundreds of thousands, even millions of pounds, you'd have thought he wouldn't be so soon forgotten.

Mind you his time up Edstone's rear end is also memorable for giving us the disintegrating rump of socialism and the sidelining of the Labour Establishment. One so bereft of any sanity they trotted out "Bigot" Brown for a tour expounding the joys of the EU's immigrant success in a referendum in which it was a decidedly a big factor for voting leave. They even gave us Edstone as a warm up act for his old Boss, Snotty.

Post the debacle we now have a huge new popcorn demand for the coming weeks, months and years. Mandleson probably too entrenched in salt mines of extreme wealth to any longer be bothered. Unlike the Welsh Windbag and his deluded belief in his own greatness and head of a future Kennedy like dynasty in the good old UK.

How miffed he'll be today when hopes of swift promotion for his nepotism, in the guise of his son, pampered with decades of our money are thwarted by the judicial ruling that "rules is rules" and Jim Corbyn, initials JC and also a superstar, in the depths of what's left of Marxism in the UK is as Teflon coated as the despot Bliar.

How the cushy world of champagne socialism is under the cosh.Their decades of dishonesty, expense fiddling and pettiness and the utter belief in their own self entitlement has, as the latest sacrificial mutton Owen might put it, smashed them back on their well shod heels! Of course the likes of Balls, Snotty, the Bliars and Kinnocks and their now long forgotten coteries embracing the Hoons, Reids and Straws are nicely set up. Yet we know, like fading and addled Geldof types and celebrities, the immature strutting and attention seeking means more than any riches garnered.

Here, reluctantly but I think decently, I admire Jim Corbyn. As I do Putin and Trump. people prepared to stand up and be counted even if it hurts any popularity others crave. For sure Jim's honesty eschews the arrogant troughing of the former crowd of faux socialists. The Prescott's so quick to grasp peerages they spend decades despising. All of them, unlike Jim, with first class honours and doctorates in hypocrisy.

As for lack of a good opposition to challenge the present Government of reluctant brexiteers. Times have changed. All those has-beens and fear mongering yesterday's pygmies failed dismally to defeat the people. Democracy triumphed in an environment heavily screwed by minority worship. I vaguely remember Balls had an hour back in front of the cameras, too. Another offering worth a fair few hundred thousand votes to quit.

Remember, too, the mighty and corrupt civil service, the prostitutes of the MSM, the interfering EUSSR and Obummer. All failed to ease Cameron through the cheeks of a very unpleasant backside that is the EUSSR. Will Straw given a mega salary to act as "election agent" so stupid as to believe somehow his nepotistic gifted good fortune was a winning card!

So, as Testes is put back in his box and onto the top shelf I give thanks for the judicial support for Jim C today. Owen Smitt mumbling how pleased he was, lying through his teeth as this Establishment of privileged Labour shoe-ins is rocked once more. Their magic idea of devolution, which destroyed them in Scotland, is staggering to hold on in Wales and now reeling in England.

Sure the Marxist, gullible and ill educated kids are heavily behind Jim. Angela Raptor got badly bloodied when she wielded the knife into Jim's stab proof vest only to be turfed aside by the hierarchy. What their next move will be when Smitt gets a mauling will be a joy to behold.

Regardless of how the next few years unfold I doubt anything but the Right will have any answers. be it in the USA or Europe, as a French member of the Public said today they had never tried that branch of political philosophy. Hopefully it will not be too late to save us all. Thank you Ed and the rest of your once smug pals. You deserve your time in the wilderness.