To Borrow An MSM Phrase.

An Historic Day My A**se 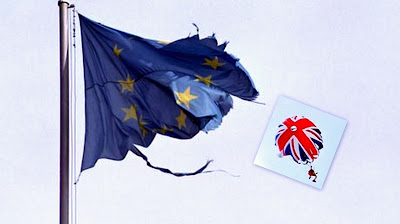 I have given up on the number of times his word "historic" has been trotted out. This shuffling of failed Prime Ministerial nonsense and the shenanigans in Labour are old hat. A bunch of smug, self entitled delusionists chasing personal ambitions and wealth with none of them attuned to the wishes of the people. All of this salivated over a media shameless in its perceived power over their theatrical production players.

One guy stands out as different. Corbyn. Sure not a man I can tolerate or at least his cock eyed social equality stupidity. None of us are able to really understand what the number 70 million people means. One thing it does mean is that each and everyone of such a colossal population cannot be equal. Impossible.

I digress. Our rare success as a people, which really was historic, was a result which flew in the face of the might of our and the EUSSR's Establishment. What is now happening is the scrabble to negate this event. The desperate need to put the lid back on an upstart 17,410,752 of us with a grain of intelligence or zero self interest in that gross, corrupt embryonic, dying dictatorship.

Am I alone in sighing at Hammond's pathetic statement that Brexit could take six years or more. Meaning, in his dark and boring psyche, if ever. The petition seeking to nullify the referendum to be debated in Parliament another matter to be pored over for a glimpse of a way to overturn that result.

Then the even bigger sigh over the talk of yet another department to appear to run Brexit. A better solution here would be to sack every Civil Service individual employed in implementing the EUSSR diktats. A bonfire of all things EU related and this "new" department be staffed by genuine Brexiteers and savings made.

Naturally this won't happen. Instead another few billions added to the national debt. Mrs May's Cabinet will be, as ever, packed with favoured faces and very few of them genuinely, if any, in tune with the mood of serious anger bubbling away in the United Kingdom.

An anger to be used for nefarious ends. Carney and the Establishment looking to wreck the economy and force us into further recession and taxation. All used as a huge club to remind us we dared rebel. The nightmare of mass immigration and violence throughout Europe will be ignored. The shed dwelling, beggar populations allowed to grow and leech of the last remnants of a once proud Country.

Our soldiers will still be at the back of any queues for housing, help and support. Our National debt will be allowed to remain unpayable. Government expenditure will be allowed to grow with no sign of any curbs in Government and Whitehall wealth and nose rubbing. Civil Service pensions will be untouched. Inversely proportional to those of the private sector. Not least the likes of BHS and Port Talbot.

As for the ridiculous crap about "one Nation Conservatives", "Labour values" and so on. Not one of them get to gain one crumb of understanding as to the reality on our streets. The barbarity gets ever more gross. Dog fighting gets ever more prevalent. Prosecutions for female genital mutilation virtually zero. A whole liturgy of decades of Government uselessness. Behaviour now tolerated under the guise of bragged about "progressive" politics.

Remember that talk of a new politics? Yeah, as practised in the political murder of Boris Johnson and the terrible rape by media of Mrs Leadsom. Likewise the Blair/Mandleson effort to wrestle back what's left of a Labour Party burnt on the stake of Bliar's vanity.

All we will get today is a short breather before the Brexit diminution gets underway. Why would anything change for the better when it's not done so in over half a century of greed and globalisation? With Hammond mouthing off on Brexit can we have any hope left?