How Jolly Well Dare We?

I Can Lie And Cheat, I'm Powerful. And Privileged. 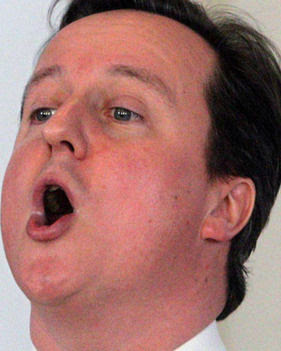 What a disappointment this guy has turned out to be. His hectoring, cheating leaflet spend and overall arrogant disregard for the nation he is supposed to nurture. That I would deign to consider him alongside that nasty, evil, tormented cretin, Snotty Gordo, speaks volumes.

I used to dismiss the "Bullingdon" attacks as sheer, leftie envy for those lucky to be born into wealth and position. However Cameron's behaviour over Europe, his pathetic lies about renegotiation and immigration truly sickening. Now we have a further dismissive arrogance over his disastrous foray into the destruction of Libya.

To add a sadistic shake of his salt cellar over us all, he is colluding in the Chilcot delay. I disagree with the Sun's reasoning, however. I strongly suspect the EUSSR played a big part in promoting this grossly foolish and stupid intervention. Bear in mind they also committed token forces to that nightmare. No doubt to gain brownie points with American interests. Together with a quiet rehearsal for the soon to be new pan EUSSR Bundeswehr army.

Cameron is the poster boy for all that a Federal European State will be like. Failed politicians and bureaucrats will hold sway, without the inconvenience of electoral accountability. Their grip on power and dominance will be underwritten by battalions of Turkish and remote Eastern States personnel. Something well advanced to that purpose. All brought together to protect the offshore billions these people have filched from their compatriots.

We can but hope we have many, many squadrons of Spitfire pilots ready to use their referendum pencils as cannon to shoot the whole cabal out of the sky. Just as the American people are looking to do via Donald Trump. A guy hailed by the establishment on both sides of the Atlantic as a huge joke.

Not so cocky now, are they? Bet the crooked apparatchiks of Wall Street and the Hilary Harridan Goldman Sachs employers are very worried. Their nastiness biting back at them as Trump has swept all before him. I wonder if we Brits will do the same to that German vehicle for a Fourth Reich, the EUSSR, come the 23rd of June?

3.45 into this piece comes these words. "their interests had been betrayed and their credulity had been practiced upon". It's, by modern standards of concentration, nine minutes long. Yet these words ring as true today as then. Any sensible, intelligent listener comparing the "remain" campaign's lies and obfuscation, just as dominant and lying back then, could not in all sense vote not to leave. Surely?

Common Agricultural policy disadvantages, fishing collapse, industrial decline all forecast by Powell, came true. Even a so called renegotiation by Callaghan, back then an exercise in futility designed to blindside the Public. See how Cameron's puerile repetition is nothing new? All very much to the disadvantage of these sceptered Isles. All born of a surly resentment for our efforts to stand up to the Nazis being successful and the ever present obsession with Germany to rule the Continent.