Or Grow A Pair! 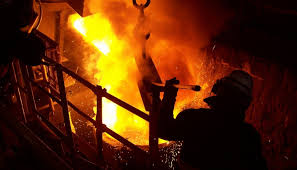 Whilst settling to write this post I was able to listen to "Crosstalk". I urge anyone with a brain cell and reading this blog to listen to this presentation. Note it is not all "holier than thou" ambience we suffer in the Western tame presentations of corporate bribery. Note also this reluctant change of rhetoric over Russia's successes in Syria. That not stopping the ludicrous claim by that crap General Petreus in another of the endless attacks making Russia a scapegoat for Western failures.

However, I digress. The problem with an untrained mind, I suppose. So back to the issue of the imminent collapse of Britain's steel industry. Something not unrelated to the fading and failing corporate ambitions of the American Cabals in economic dynasties and their now losing quest for supremacy.

Ironically it is my belief that the befriending of the Sunni tribal interests in the Middle East and globally, has a major consequence in our industrial and economic lives, now and in the future. One fronted powerfully and with a once unassailable wealth, by Saudi Arabia. It is of some importance that Turkey is a staunch ally of those despots. The same alliances which have been a big player in bribing, via multi billion defense contracts, the isolation of Iran to name one awkward consequence.

Most of these global expansionist projects have gained much ground since the fall of the USSR. That a welcome peace opportunity squandered by America's lust to exploit that initial loss of competition and build unsavoury alliances to further an arms and economic push actually slowed by the loss of a bogey man. Or should that be bear?

Now part of the strategy, not a conspiracy but an ordered progression of a logical need to assuage a lust for power, is the European Union. Or as I now see it an Islamification of Nations needed to be subsumed and separated from their history, identity and cultures. National pride and sense of belonging not conducive to a global domination.

Now, along the way, the Americans, led decades since by that pillar of truth and decency, Richard Nixon chose to court China. Bear with me, steel problems will emerge. Now why? Again I believe this was the early stages of a realisation by corporations in America and their banking friends globally, that the aspirations of Western peoples, engendered by advertising 24/7 that all were deserving of millionaire lifestyles, were becoming ever harder to fulfil.

Gradually the wages demanded to purchase the goods being manufactured, to try and satisfy the insatiable, began to be unsustainable. What became a solution to this necessary demand, if growth was to be maintained,? Debt.

Initially an exciting 20 years or so was fuelled by banks and financial institutions, with the blessing of Governments. Mortgages, savings and anything that could be accessed was used to push consumers into unthinking and blind partying. The massaging of entitlement knew and still knows no bounds. At least that was the case as wealth was plundered from millions and millions of people to the benefit of few.

So subtly and secretly, when able, Western Establishments began to desperately need cheaper production, ergo, labour. So a continued vilification of all things Russian whilst a somewhat passionate courting of China was chosen to boost the ability of supplying the consumerism, now out of control in the West.

Add to these matters a policy of expansionism, again to fund an elite minority, we begin to see that these on the hoof machinations have spiralled out of control. Thus the grip by a tame political elite, in hoc to the corporations, bought through engineered prosperity to buy votes, is now outdated. Albeit depriving European peoples of a democratic national voice was never going to be easy, it is happening.

The T-TIP agreement, coupled with Islamification, part of the stumbled upon way to pursue a policy of cheap labour and the exportation of jobs to the lowest and usually poverty stricken work forces. The residual wealth of the post war Western generations now being used and watered down to keep the very wealthy, their corporations and drug lords in luxury. That this is ruining economies once proud and worthy is of little concern to the Establishments removed from the reality of these actions.

Cameron and his ilk will have lost little sleep in Lanzarote when they are fully aware that the loss of jobs, incomes, savings and pensions will not affect their cosy, privileged existences. Also the possibility, in my mind likelihood, that it part of a grander scheme. That the establishment of a gigantic centre for steel production in China, together with other industries, including coal and the like, is a ploy to offload embarrassing polluting production, a neat sidestep.

Add also the possible understanding that the Chinese political model is one worthy of a global roll out, is not without merit. Thus horse trading with China is probably now considered a price worth paying. The EUSSR a vehicle on which to help hitch the EU project firmly to.

Independent Nations the last thing wanted to get in the way of this global plan. A few thousand, overpaid, in comparative terms with elsewhere like China and the third world, though punishingly taxed, pension deprived skivvies in Port Talbot and throughout the UK, a miniscule cost in the overall schemes afoot.

Yet again I turn to the one possible saviour to these ghastly plans. Russia. No wonder they are seen in such a bad light and a propaganda war, similar to the one waged by Europhiles, fully underway. However given China's support for Putin in his ever more successful, legal support for Assad, no doubt Chinese inscrutability will be at full throttle!

So if you fear for our future here in Britain you need to wake up to the devious manner we are being shafted. You can do worse than, with healthy scepticism, tune into RT.com and gain a different viewing angle to the one forcd upon us by our very own despots and dictators. Bullies and weak instruments of a corrupt and very nasty crowd. Many quiet supporters of ISIS. Syria a mirror worth looking deeply into. You may even glimpse a metaphorical consuming blast furnace of Western steel production.

If that is a stretch too far, then checkout the EUSSR's misty reflections. What good is an EU which allows this?