God Save Our Gracious Queen.

Why Would A Sovereign Not Back Sovereignty? 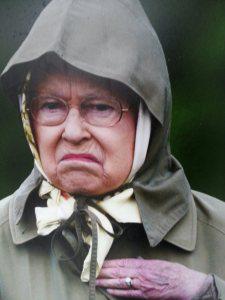 I don't see why Her Maj should not have a vote. After all it's her sovereignty that is a risk. Already Cameron, Bliar and the future successors to their grossly inept qualifications to run our lives have surrendered us all on a plate to be devoured by Germany and its political wing in Brussels.

Merkin Merkel has more sway over our lives than Her Maj. Not something I care to dwell on. Not least, despite the smarmy, weasel, treacherous words and deeds of shadowy meetings and hush hush talks, we are run by the EUSSR.

The latest betrayal the pathetic and weak surrender to Erdogan and his Turkish thugs in power. How's this any different to Assad's supposed behaviour? Of course we mere underlings are not meant to question the all consuming, unhypocritical and joyous way our cretinous and corrupt EUSSR choose which despot to favour at a given time.

The picture of the Queen above is taken from this gross state of affairs already prevalent. Birmingham already a predominant Muslim City. Who the FCUK voted or wanted that? Not a thin end of a wedge. A solid thick end soon to be re enforced throughout these Islands. It's our souls and future, not "theirs" being sold out. Our money to be pissed up the wall.. Not only being forced to go digging our own graves but coerced into urinating into them.

So I shall sing even louder the National Anthem just to let off steam at the scum selling us out. The only downside, I suspect the Plant Whisperer has already been measured for his Imam Robes. Ayatollah Tsharlz  Am I being ridiculous? Of course I am!  Perhaps an attempt to hang on to his wealth and avoid a Sharia Court sentencing tribunal. One probably chaired by Erdogan as his fellow countrymen swamp even more these and the once great nations of Europe's Cities.