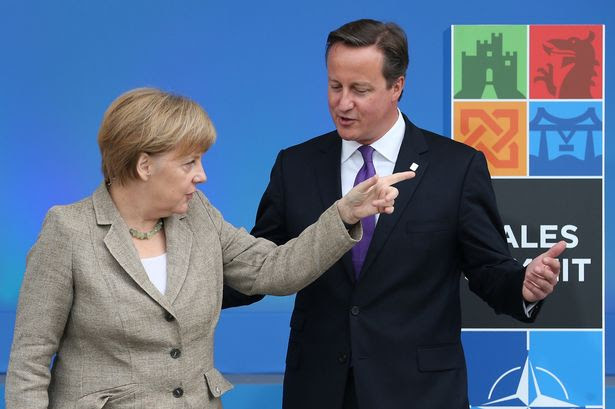 Dave and our President Telling Him Off.

The dinner at the European summit was like a bad pantomime. The only clown was our Prime Minister who attempted to convince EU leaders to support trivial ‘demands’ for so-called reforms of our relationship with the European Union. Nobody was laughing! It’s highly telling that David Cameron was only granted a half an hour – YES, just half an hour - during this single dinner to address the EU leaders during the EU Council dinner. He repeated his proposals and signalled he was willing to compromise on restricting migrant benefits.

Even the Labour leader Jeremy Corbyn admitted today: “I am very unclear as to what the Prime Minister is actually negotiating on in Europe….” Aren’t we all too!

Cameron had anticipated the working dinner to go on until the early hours of this morning. However, the circus tent was done and dusted in a few hours, and at around midnight he held a press conference. It didn’t bode well. The conference descended into a shambles as the Royal crest – taped by flunkies to his lectern - continually and embarrassingly fell off!

Even before the dinner, Cameron was hit by a wall of hostility. On the way into the Summit, other leaders lined up before the TV cameras to make it clear there would be NO deal on benefits – his main concession to Britain’s demands and also part of his election-winning manifesto!

This reveals the contempt the European elite have for both the British government and the Great British Public.

Despite ‘Call me Dave’ saying he has made progress with an agreement, it is clear he has dropped his discriminatory 4-year benefits demand for new migrants, in exchange for ‘help’ on migration.

It’s suggested this could mean the EU ‘suggesting’ an ‘emergency break’ or a similar measure, which would in turn require permission from the EU Commission. This is not what we need! And no treaty to confirm anything. Ultimately, it’s clear Cameron will not succeed with the promises he made to the voters at the general election – ie he will not be able to take back powers from Brussels. He is clearly contemplating surrendering even more controls to the EU in order to gain their assistance to ‘con’ us to vote to stay in the EU come the referendum.

Don’t be fooled. Get Britain Out will make sure we keep reminding Cameron of his promises!

In an article published on Huffington Post, we discussed how the Great British Public are least likely of all those in Europe to describe themselves as ‘European.’ The EU has tried to create a new identity for those living under its dictatorship, with the EU flag and national anthem – but when people are tied together in a Union they do not want, only one thing is certain to happen – the Union will eventual collapse! (The EU – Doomed From the Start)

Looking further afield, Get Britain Out explained why leaving the EU will not damage our traditional transatlantic relationship. The so-called ‘Special Relationship’ with the United States will be under even more threat if we remain in the EU. Many Presidential candidates have already replied to Barack Obama's unhelpful recent comments. America would, of course, sign a free trade agreement with an independent Britain. As the referendum date draws nearer, more and more US commentators will recognise the EU for what it really is - centralised, undemocratic, and bureaucratic. (Brexit won't Sour US - UK Relations - The Commentator)

In addition, we followed the latest developments in the EU's plan to gain access to your private, personal and financial data. The so called 'Passenger Name Register' will track the sensitive information of all EU citizens travelling by air within and into the European Union. Despite Britain already having our own self-funded system, Brussels is disgustingly taking advantage of the Paris terrorist attacks in order to centralise and consolidate the EU’s power across the continent. Why is this so? Mass data retention does absolutely nothing to combat terrorism, and this plan was rejected in 2013 after it was originally deemed ineffective and disproportionate. (The EU's Answer to Terrorism!)

Last week TIME magazine named the German Chancellor Angela Merkel as their ‘Person of the year.’ Merkel has certainly been Europe's lead actor over the course of 2015, however, as we point out in The Commentator, her policies will destroy the EU and could be decisive in the battle for Brexit. (Time will not prove as kind to Angela Merkel) This article was also cross-posted on America's top aggregator: Real Clear Politics.

Conservative MP Philip Davies has written another exclusive article for Get Britain Out, busting some of the usual myths pumped out from the Europhiles. (Philip Davies MP: It’s Time To Bust EU Myths)

We have condemned David Cameron and George Osborne in their not-so-cunning attempt at tricking the public with fixed immigration figures. The only way for the British government to satisfy the public's’ needs when it comes to immigration, is to get net migration down to the tens of thousands as Cameron promised, and not the hundreds of thousands as the figures now prove! Under no circumstances should Cameron even be considering opening Britain to an additional 70 million Turks, as the EU is intent on doing. Find out how the EU intends to lie to you in our article for Breitbart London. (Britain Deserves Truth On Immigration)

Seriously – but for fun - we revealed the news the EU have released their Directive on the use of candles. Yes! The EU Directive includes some ‘top tips’ for both suppliers and buyers - such as “free-standing candle or candles supplied with a holder or container shall remain stable (e.g. not tip over) during burning”… and “never leave a burning candle unattended”. What a great way to be spending our tax money! (EU Dictatorship Burns Brightly in Time for Christmas)

This week the European Scrutiny Committee warned voters Cameron’s ‘new deal for Britain’ could be torn apart by European judges following Britain’s referendum. The head of the Committee, Sir Bill Cash, has warned voters that without treaty change, Cameron's plans for reform are worthless. This has piled the pressure on the PM to secure meaningful reform through treaty change, which is highly unlikely to happen before 2017. This is clearly meant to help disarm later attempts by Number 10 to spin the renegotiation as ‘a good deal for Britain’.

MPs overturned the House of Lord’s amendments on extending votes to 16-17 year olds enabling the progression of the EU referendum bill. Our Director, Jayne Adye, was quoted in the Daily Express commending the House of Commons for rightly rejecting this cynical attempt by Europhile peers in the House of Lords to skew the referendum in their favour. With the bill receiving Royal Assent today, there is nothing preventing the Great British Public from voting to Get Britain Out of the EU.

We finish on some good news. A new Lord Ashcroft poll has shown that at least 47% of voters plan to vote to Leave the EU versus 38% opting to stay, with 14% still undecided. This poll is the largest ever carried out in recent years - with 20,000 people asked - and comes just after this week’s Survation and ICM polls which are indicating the vote will be increasingly close. A Brexit is looking more and more likely!

Thank you so much for your continued support. But as you can see, we still have to inform and convince at least 14% of voters we will be better off if we vote to Get Britain Out of the EU when the referendum comes. We need to ensure the Great British Public will make the right choice and vote to Get Britain Out.

Reproduced from here. Get out before it's too late.
Posted by Oldrightie at 12:02