Politicians Answer To Lack Of Resources. 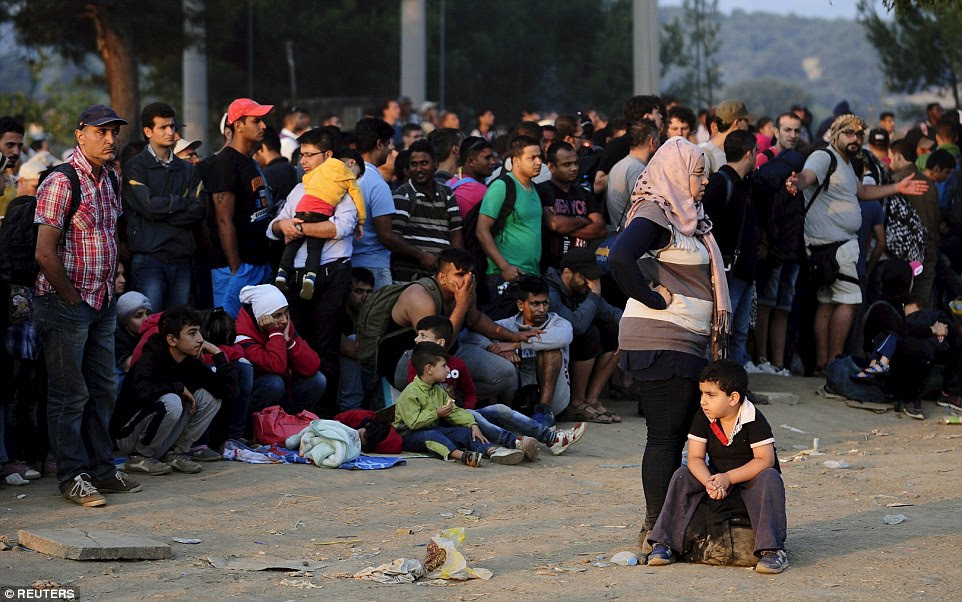 Still, the chatterati won't be bothered for some time. No queues in private hospitals, nursing homes, schools or private Doctor's waiting rooms. Rooms in the public sector soon to have to be 747 sized hangars. "We must be mad".

As for the humanitarian argument. Mass immigration into Europe and the UK Islands, over decades, has left us bare of any real ability to succour genuine need. Including every ordinary citizen. When it gets to a tipping point of shortages and economic collapse, what then?


"Defend your national territory  or lose it
Robert Henderson

The present attempts of migrants from around the Mediterranean and  beyond to effectively invade Europe have brought the long simmering immigration threat to a head.  First World   politicians can no longer pretend it is under any sort of control. The question those in the First World have to answer is  gruesomely simple: are they willing  to defend the their own territory as they  would if faced with an armed invader  and by doing so preserve their way of life and safety , or will they allow a fatal sentimentality  to paralyse the entirely natural wish to stop invaders until the native populations of the First World are at best a tolerated minority in their own ancestral lands and at worst the subject of acts of genocide.
The Prime Minister of Hungary Victor Orlan  has had the courage to point out  something which is obvious but anathema to the politically correct elites of Europe, namely, that  immigration on the current scale will result in Europeans becoming a minority in  their own continent with a consequent loss of European values.  Anyone who thinks that Europe (and the rest of the First World) is not in danger should think on these facts:
At present the mainstream media in countries such as Britain and the  USA are voraciously feeding the public what amounts to unashamed propaganda  to persuade them to accept not merely huge numbers of Third World immigrants now,  but an ongoing and ever increasing stream in the not too distant future as the invading hordes gather around the Mediterranean waiting for their chance to entered the promised land of the rich European states of the north.
It is easy to be swayed by photos of  a  young child who has died or   boatloads crammed to the gunnels with miserable looking people  to the point where the resolution to defend your native territory is overridden, but look at the aggression and sense of entitlement the invaders, for  that is what they are, as they battle to leave Hungary. They are in the position of supplicants but far from begging for help they demand as a right that they be let into the richer countries of Europe.
There are very few if any places outside of Europe and  the Anglosphere countries of the United Kingdom,  North America, Australia and New Zealand  which have any serious history of freedom and the rule of law and even amongst that group only the Anglosphere has  enjoyed  both an uninterrupted political system of representative government and been free of civil war for a century or more.  These are countries which have the very rare and valuable attribute of having worked out a social and political system which creates peace and tolerance. That seriously at risk because of mass immigration. Does anyone believe  for example, a that Britain in which there was a Muslim majority would remain a Parliamentary democracy or have any regard for free expression?
Those amongst the native populations of the  First World who propagandise in favour of mass immigration do so in the belief that they will be untouched by the immigration because they live in affluent areas where immigrants cannot generally settle. Not for these people state schools which “boast” that “there are 100 languages here”; not for these people a need for increasingly scarce affordable (social)  housing  in places such as London; not for these people having to use grossly over subscribed medical services in their area.  These people think they are safe  from the effects of mass immigration,  but if it continues their children and grandchildren will not be so lucky. There needs to be a penalty for those who promote and facilitate mass immigration, for example,  forcing them to take immigrants  into their homes and be responsible for their upkeep .
Mass immigration  is conquest not by armed force but by those who are come equipped only with their victimhood and misery and, most potently, the  mentality of the elites in the First World who subscribe to the idea of white guilt and the white populations of the First World who have been browbeaten  into believing that they cannot have any world other than a globalist world which includes huge movements of peoples. We are seeing the scenario described by Jean Raspail begin to play out.
Homo sapiens is the social animal par excellence. All social animals need boundaries to their group because trust has to exist between the members of the group. Human beings can tolerate very large numbers in their group, but there is a limit. To be a member of a functioning human group,  whether that be tribe,  clan or nation,  the members or the group must share sufficient distinguishing behaviours and  attributes to create the necessary trust. Putting huge numbers of people with very disparate background together cannot create that trust. Anyone who doubts that should try to find any society where territory is shared by different racial or ethnic groups  that does not have inter-group discord,. They will not find one in history or the present.
If you wish to save your country ignore the  misery now being waved in your face and concentrate not on the immediate present but the future.  Say no to further mass immigration by voting to leave the EU because while Britain is in it nothing can be done to stop massive numbers of immigrants continuing to come to Britain.  Leaving the EU will  remove from our political elite any excuse for not stopping the causal destruction of our country."