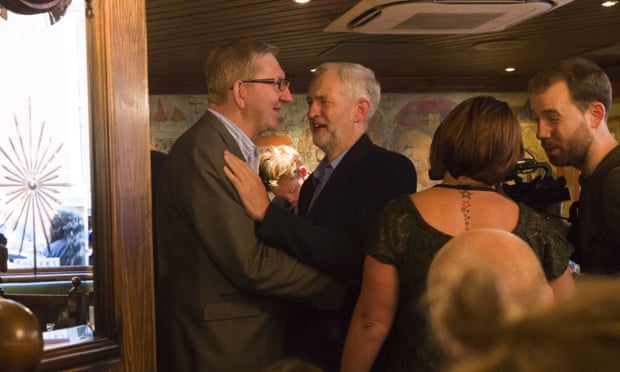 My grudging admiration for Corbyn blown away. No better than all career politicians and particularly the penchant for nepotism and then some. This is a bloke  wedded to typical chip on the shoulder leftard envy. It must be some ancient throw back to some slight, experienced way back in serfdom days, that pollutes these brainless fools.
Also wildly hypocritical is the venom spat at those beneficiaries of inherited privilege, with absolutely no sense of the shameful nature of applying that very same privilege to their own kith and kin. As ever, the mantra of left wing ideology is suspended for themselves, as they lay waste to the middle classes' decency, striving and desire to create the best for their offspring via hard work and sacrifice.

As for the picture above. Two expressions which show the smug satisfaction that goes with an underhand coup executed with precision and careless morality. The end justifying the means. There can be little doubt McCluskey funded hundreds of thousands of £3.00 a pop leadership cannon fodder to shoe horn this Lenin clone as head of the so called Labour Party.

As for Corbyn's change of heart on the EU. He sees it as I do. The USSR reincarnated and a new socialist empire with which to subjugate even further the Nations of Europe. We can but hope these gross and despicably dishonest nasties get their comeuppance. If they don't our demise will be accelerated toward this grotesque and cruel dictatorship of scum.
Posted by Oldrightie at 19:32