The Establishment's Favourite In Disarray. 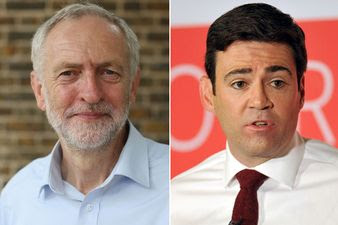 Panic is overwhelming Labour.  Their very own South Staffs NHS Trust Ratko Miladic, good old Andy Burnham, seems to have not been so easily able, unlike the IRA murderers, Adams and McGuinness, to shake off his bloodied hands history.

It is said, with some grain of truth, that Corbyn is more honest than the rest of them. Given Socialist propensity for hatred of all things honest, realistic and human, that isn't too big an ask. That, despite decades of socialist disasters, throughout human existence, to be honest as a dinosaur is quite quaint.

What is even better is that a victory for this leftie, who makes Union Boss McCluskey look like an altruistic vicar, would give the parties of the Right one hell of a boost. His speech this morning a wonderful lecture on the aimlessness of any real understanding of nature and human nature.

Corbyn's speech today ranted on about non-existence austerity. John Redwood continues to try to slay that myth but it's non-existence neither suits the Government or the "opposition". The former uses the misnomer to hint at harsh competence, whilst Labour use it as a stick to beat "nasty Tories". Both ludicrous, negative and damaging confidence tricks, on the long suffering public.

Still, we can be sure the tried and tested disastrous years of public ownership, railways, motor manufacture, steel and coal mining spring to mind, will still resonate as antiques philosophies only able to bankrupt nations faster than global conflicts.

So for those of us still struggling to hide our joy and gloating at the possibility of disintegration, now haunting Labour and their Luvvies, Corbyn, dancing a jig of victory in the arms of McClusky, would be a sight to behold. Albeit either an ominous or optimistic vision, for those of us wedded to the concept of self reliance before feckless profligacy, that jig would make us very pleased.

For sure Corbyn's cause and chances were boosted heavily this morning when Bliar tossed in his unwanted observations. That was, for Burnham, like a turkey farmer promising a painless pre Christmas! More popcorn, please, Harriet. A lady likely to join the ever swollen ranks of ennobled socialist hypocrites, still transforming the Upper Chamber, on hundreds of pounds of blood money a day!

Notice these House of Lords Labour graspers never mention, the poor once ensconced in that House? Between them they could fund food banks in the poshest hotels in London. They don't though, do they?