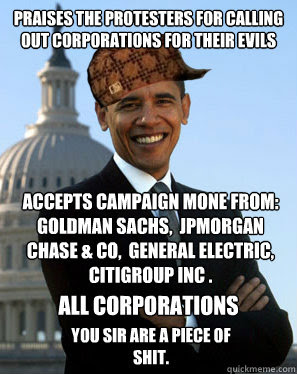 With thanks to this blog.

The largest mouthpiece for Common Purpose pontificated on the UK's membership of the EUSSR this morning. Forget conspiracy theories. This was a staged, planned and executed piece of expensive propaganda with the ghastly BBC used to present the charade. A bunch of overpaid TV executives toeing the EUSSR line in the hope of great rewards in the future.

As I have often suggested, the corporate manipulators seeking to dominate the planet donate to all and sundry so long as they stay in line and look to follow the path of global domination by American based greed. It gets ever harder to gainsay the brutal and medieval nature of IS when their actions are bloody and sickening but at least up front.

The way of the Common Purpose terrorists is patience and stealth. Something perfected by the EUSSR. I am just a tiny bit surprised at this Obummer intervention this morning. Less subtle and more obvious than the normal methods employed by this cabal of corrupt servants of Mammon.

What we can be sure of, the Common Purpose goal of subjugation will not brook upward social mobility outside of their influence. Future talent and entrepreneurship and the freedoms it presently offers will not be tolerated. Obummer is proving that point as he dances on the end of those very same puppet masters strings.

To hear the clown wax on about how the world's a better place for EUSSR/American joint ventures beggars belief in its delusion. To add insult to injury he continued to claim that the UK could only have any influence on the world's stage as a member of that corrupt model of how the USA corporations do business that is the USS EU Enterprise.

A perfect example of my thinking lies in the EU-US free trade agreement stich up. A nuclear agreement to freeze out all who are not in the "club" and thereby create price fixing and global sanctions for all those countries daring to wish to trade more freely and democratically.

So this gross and grisly economic war goes on. As further evidence of its thinking note the alienation of Russia with Ukraine a pawn in that process. Regime change and the installation of a friendly family of suspiciously mega rich oligarchs. Further evidence of how this "Common Purpose" works.

When we examine the ever growing poverty throughout the West, Greece just the current dish de jour for the in harness media. Suddenly Corbyn might be a wild card, with a degree of uncommon purpose. Read that article linked to in the previous paragraph. Suddenly Corbyn seems like the Second Coming. That from a rabid Oldrightie!

As much as I loathe socialism, I detest equally any vested interest looking to ride roughshod over everyone else. How this corporate, all consuming, pun intended, Leviathan has gained the grip on our lives it has is hard to understand. It is, however, desperately unhealthy for the majority of the human race. No dictatorship is right. A global one even more . unpleasant. It might pretend benign benevolence but at it's core is a nasty and vicious malevolence all greed engenders. Only its manifestation differs. Obummer just the latest poster boy for the movers and shakers.