Defence For The Indefensible. 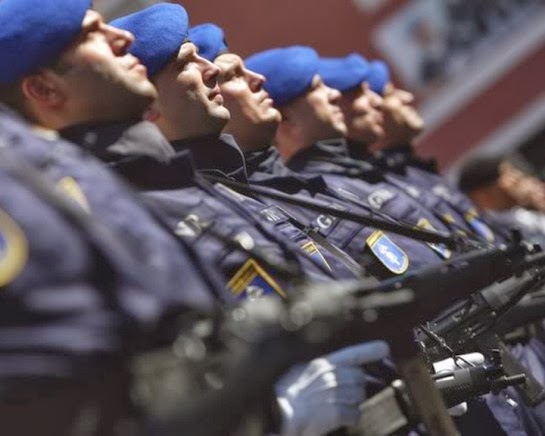 The picture is of the EUSSR police military force. Now Herr Juncker calls for an army to bolster any further undemocratic dictats likely to spark unrest among the Eloy peasant groupings. As reported here and elsewhere. Since, as he rightly sees matters, the EUSSR may be useless and incompetent, crooked and bent but it remains very powerful and dominant over its member states.

Since this power is on the back of huge debt and incompatible economies, people and cultures, both endemic and imported, the EUSSR Commissars such as Juncker, know force, staffed by stateless troops, are or will become necessary to quell dissent and rebellion.

I really believe the sabre rattling stupidity by Obummer, Camoron and the EUSSR amateurs against Russia are all part of the scare tactics to turn NATO into an EUSSR force. One so mongrel as to be easily deployed, just as the EU Gendermerie have been deployed in Greece and elsewhere, against dissenters, regardless of Nationality. Imagine a Brigade of Turkish, Islamic "law" enforcement, already available, being used to enforce draconian suppression of French or British demonstrations against EUSSR rule.

If you need further convincing, why was Hammond waffling to Marr when pressed on future defense spending? He boasted of the Royal Navy's new carriers but failed to mention the sharing of same with France. Of course such deals would then easily be expanded to the rest of the 4th Reich, as slowly and stealthily we are subsumed into a Federal EU entity run from Berlin.

Add to Hammond's bluster over other armed forces cuts and expenditure, we can realise that, in reality, he is speaking of the commitments expected to the EUSSR/NATO costs. In the mindset of Whitehall and Privy Councillors, military expenditure is already the remit to EUSSR requirements.

What is also awful to contemplate is that these troops may well be heavily comprised of Islamic personnel. A circumstance which would play well for the Muslim ambition to rule the world. Of course such ambition takes little account of Sino-Russian nationalism and thus the confrontation that would become inevitable in years to come.

The idea that the EUSSR Federal creation would somehow lead to peace for evermore, is naive beyond belief. Regardless of major resentment and future unrest within those countries likely to mourn the loss of their centuries of identity, the clash of an Islamic led EUSSR with the US would be another possible unintended consequence. The nuclear weapons matter a more terrible consideration as to how it's all panning out.

As for the UK's May elections. Already the once totally incredible idea of a LabCon "grand coalition" is being mooted. When such ideas gain publicity and given the EUSSR's stealth tactics now ingrained in our Establishment, you can rest assured the subject is well ahead in the overall ambition. Ergo, talks are already well advanced, behind closed doors.

Only one irritation affects these schemes, UKIP. Indeed the quicker pace of pronouncements, such as Juncker's and the planting of the seeds of a LabCon con, post May, may well be nervousness on the part of the Establishment. However, rigged postal votes, more vile efforts to blacken UKIP and subtle, secret funding for those purposes, provided by Brussels and Berlin, I doubt the UKIP threat will be allowed traction.

Time alone will tell if my fears are proven right. We have other aspects of fate to consider. More economic collapse, more dreadful atrocities in the Middle East causing potential involvement of foreign forces, be they Russian or Western. More nefarious attempts to destabilise Putin and Russia, since the latest, bungled assassination looks unlikely to have done the job. The gaining of nuclear weapons by terrorists cannot be ruled out either.

If only we could find another Churchill, even if a brilliant leader may well be too late, it would be good to try and get our Country back. Not just roll over.