The UK In Its Death Throes. 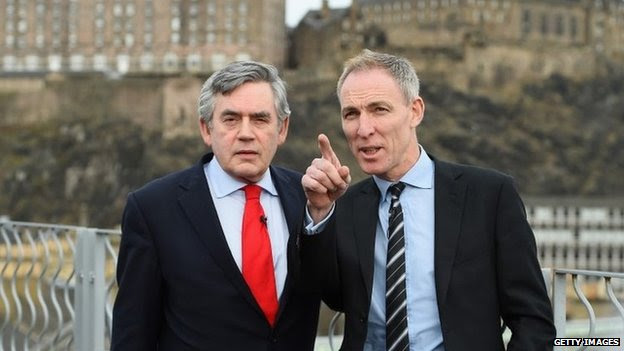 Pointing South, "we filch their dosh but not our own, eh Gordo?"

Appeasement is alive and bad. North of the Border, that is. Many of us knew Labours' devolved powers to Scotland would end in the break up of the UK. It is delayed but as the years roll by and the other member Nations watch helplessly on as their hard earnt taxes are squandered by, or will be, by of all people Cyclops Snotpicker and his new very best pal, Jim Murphy.

They are likely to be heavily trounced despite their profligate promises to rape England's tax payers, even more than hitherto. That ghastly creature, Murphy gloated over his plans to hammer "wealthy" English people in order to cover the burgeoning health costs of Scots' fondness for sloth and deep fried anything, let alone mars bars. Remember the "rich" in socialist speak, are anyone not socialist supporting.

The ludicrous situation is that Labour might be consigned to the same level of apathy as the Tories, in Scotland but the SNP's socialist republic agenda will be underpinned in a hostage to fortune coalition with Wallace and Co. A coalition which will see a yet again soaring deficit under socialism used to fund a questionably undemocratic minority.

This time a once valued British ethnic partner rather than a gerrymandered, mass imported third world additional underclass expected to vote, like Turkeys for Christmas, for Labour. None of them able to see the decades of sink estate deprivation and never ending suppression by socialists climbing over them to secure personal gain.

Part of me would have wished the Scots to vote for independence, if only to experience the hardships always visited on society by socialist rhetoric and borrowed promises of jam tomorrow. How quickly the SNP would have had to go to Brussels, or even London, for bailouts a la Greece.

Furthermore the natural and more successful small and large C conservatism of the English might have been able to have many years of stability and proper governance by management. Not the interference experienced by the socialist need to control everything.

This could still come about if the English wake up and vote for a large UKIP vote share, alongside a strong Conservative backing, South of The border. If, as looks ever more likely, Labour are left with devolution egg on their faces and the SNP consigned to the new form of old LibDum ineffectuality, even with 30 odd seats, then all could be well.

The nightmare of two sworn enemies, Labour and the SNP, carving up a plunging economy to prop up unfundable deals and backhanders will be terrible. The only positive, albeit bankrupting at that, would be the electorate just might realise they screwed up. That would be a first, of course. Yet it happened, eventually, in Greece.

How much better the UK used to be when united. Now, thanks, in the main, to Labour but aided and abetted by the Westminster creeps in general, the divide and conquer mantra is alive and well. How sad our once proud and decent Britain is turning back the clock to a fractious, ill tempered and bordering on neighbours from hell.