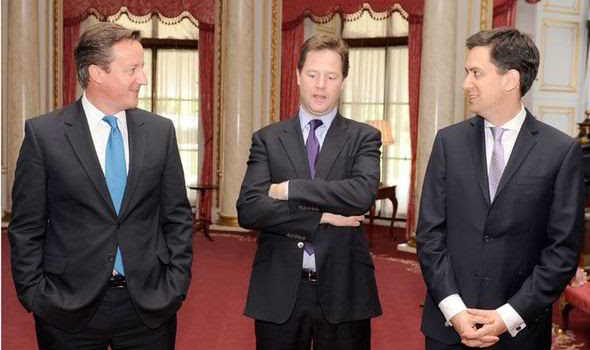 "So that's agreed, dear friends, for the umpteenth election we won't discuss immigration and it's terrible demand on the NHS, education, crime and importation of thousands of terrorists."

So off we go. Camoron chooses the improving but still in the intensive care unit, economy and how, as they always do, Labour and their Union bosses will destroy it totally. Cleggy will just mumble how they've held back the "wicked" excesses of Tory rule, (as if they have done squat diddly but posture). Milibad will bang on with Labours' convenient memory loss over the NHS debacles, genocidal management and disasters over 13 years of useless, enforced ideological and failed dogma.

Apart from Labours' economic shambles and gerrymandering, vote buying with their own money, the thicker end of the electorate, their NHS record is second to none. As we should never forget. However if we would sooner use up to date facts to point out Labours' utter, fatal incompetence, where NHS delivery is concerned we have the scandal of  the Labour run NHS in Wales.

Given Labour bang on about their NHS fitness over others competence, it beggars belief how they totally ignore reality and fact. However, anything but mass, uncontrolled immigration is to be banged on about. Truth, fact and evidence, to be ignored. Lies, fairy stories of golden uplands and the pathetic repetition of decades, is to be the election campaign.

Food banks, homelessness, child sex trafficking and brutal abuse, are all consequences of Establishment incompetence and smug arrogance. None of these failings to be mentioned, over months of mantra driven stupidity. Most of us deserve better and should have a campaign which explains how come none of the promises ever made in the past have been met. An explanation as to why these moronic, trough gobbling ignoramuses should be believed this time round. Don't hold your breath and be ready for higher taxes, more austerity and an even worse cost of living crisis, under a vote rigging Labour victory.