The Real Reason To Loathe The EUSSR. 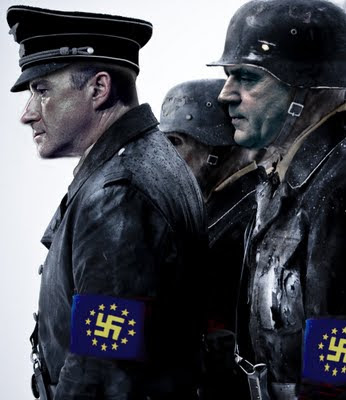 Pic from this prescient blog.

As we approach the end of man's calendar 2014, the globalisation project, of which the EUSSR is a blueprint, goes ahead unhindered. I am fortunate to have several links and recent precedence to show the efficacy of  the awful agenda now well advanced.

Think back to the rape of our economies, to save the headlong dash to a system run by wankers bankers and corporate crooks. After testing how much they could get away with, a second, though smaller, confidence stunt was pulled on those with assets in Cyprus. The links show here and take us here and show the argument well.

My desire is to attempt some kind of further exposure and to hint at how this blog has been vilified so many times, conspiracy theories or not. Matters such as how Iraq would lead Afghanistan into the list of historic and puerile ventures, costing so many lives and brutalising so many living and surviving. None of those guilty of these follies, however, lose their status of privileged, unquestioned responsibility.

Their peerages, their multi million pounds/dollar, arms dealing and/or drug dealing scams, nothing touches their arrogance and club memberships. Not even their paedophile members, within the establishment core, have anything to worry about. Claim "national security", threaten or murder dangerous claimants and strike further fear in those left scarred, scared, petrified and damaged. No evil bad enough to flush them out.

So when, via the links above, we learn of the passion Legarde has, to use her quite perfect credentials, to steal everything from those prudent citizens with most to lose, we need not be surprised. The IMF is now chief lender and prop to the EUSSR, without which the euro would probably already be dead.

Better still, for the PTB, these ghastly ideas, to steal the last dregs we are only just allowed to enjoy, pensions, homes and savings, are already trialled and got away with. Both links mention the long used smoke and mirror tactic of rolling out a figure which, when halved, seems less scary. In reality we then forget this is but an initial raid. Suddenly we find ourselves FORCED into a regular tax levy, annual, eventually, direct to the IMF, for handing over, less the backhander commissions, to the EUSSR.

This, again as linked to, shows the future of generations to come. Not content with the present, despicable theft of death taxes already levied, we are to sit back and lose any reason to have any kind of legacy related assets. Just as those, with a lifetime of sacrifice, to gain aspirational lives, stand to be punished on our death beds, those wealthy enough, Ms Lagarde and her ilk among them, or without any assets at all, get to avoid the pain and anguish. All of them having sucked, like leeches, the body middle class.

The two figures in the picture above were the storm troopers of Labours' 13 years of treachery. Post that successful campaign, Camoron and his leg iron, Clegg, have just followed on. Full of piss and wind but totally committed to all things corporate, global and EUSSR. The destruction of Greece's economy, the mugging of Cypriot held accounts and the desperation over Ukraine expansionism are all perfectly acceptable.

Add to the list of this global elite Obummer and all we have left to stop "them" is Islamic terror, Chinese numerical dominant advantage and Russia's own reasonable desire for independent nationhood. I will wish everyone a happy New Year but it's with a catch in my throat and fear in my heart.