In The Sack Of Westminster. 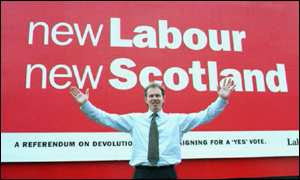 What a legacy! Not content with the Iraq genocidal fall out and the Afghan nightmare, still endless, our Tone and his band of nepotistic, self- interested, white van man ridiculing, pseudo socialists and lackeys to the Union thugs, all decided that to hold back the SNP tide, they needed to bribe the Scots with devolution.

Now Sir Jeremy's poodle gives us this unfair settlement, wherebye yet another UK minority gets first call at the English teat. As the rump of the disintegrating British Government prattles its death knell noises, soon to be subsumed into Europe, all this crap, spouted today, is irrelevant.

Who the lot of them think they're fooling is beyond me. Unless the UK gets back to a genuine Union and rids itself of all these squabbling, out of touch and quisling scum, the future of this Nation, once deserving of the title "Great Britain", is nought but strife, more grooming gangs, thugs and ever more uncontrolled immigration.

However, given Labour might be swept away through all this, I really do need to fall back on this YouTube clip!