Snotty On The Stump. 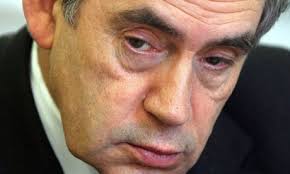 The desperate No bunch had a meek and humble Davy pleading yesterday, today they let loose the mad man of Kircaldy. Upped his medication, wound the key, cleaned his nose for him and set him loose.

The very fact of abject, permanent poverty, sink estates and mass immigration has kept the UK and Scotland in a socialist engendered nightmare for their voters escapes the thick underclass. So Snotty, lying blatantly about how Scotland never use private health services, goes unremarked.

He ranted and stomped with self pitying faux self righteousness in a performance to match all of those crazed efforts he plagued and infected us all with for 13 disastrous years of mismanagement.

A man who bailed out his job as an MP with billions of tax payers' money yet to be earnt. A useless, deranged clown who was allowed, by the Labour Party to work his destruction of banks and our UK economy. If any Scot watching this stage managed parade of a lunatic, whose absence from the asylum is permitted due to his Ponzi charity schemes, lining his controllers' pockets.

The present incumbents making a poor job of governance, ably hampered and played by the conniving ponces and pederasts in Whitehall, look superb when they are put alongside the strutting, staring, mumbling, self promoting grossness of this awful creature. Why vote to remain in this weirdo's, closet pederasty orbit if you could vote yes to leave?

Now for a real and powerful political speech, overflowing with common sense, would you not vote yes to this leadership? With a brain rather than a socialist implanted obedience gene, you would be guaranteed!