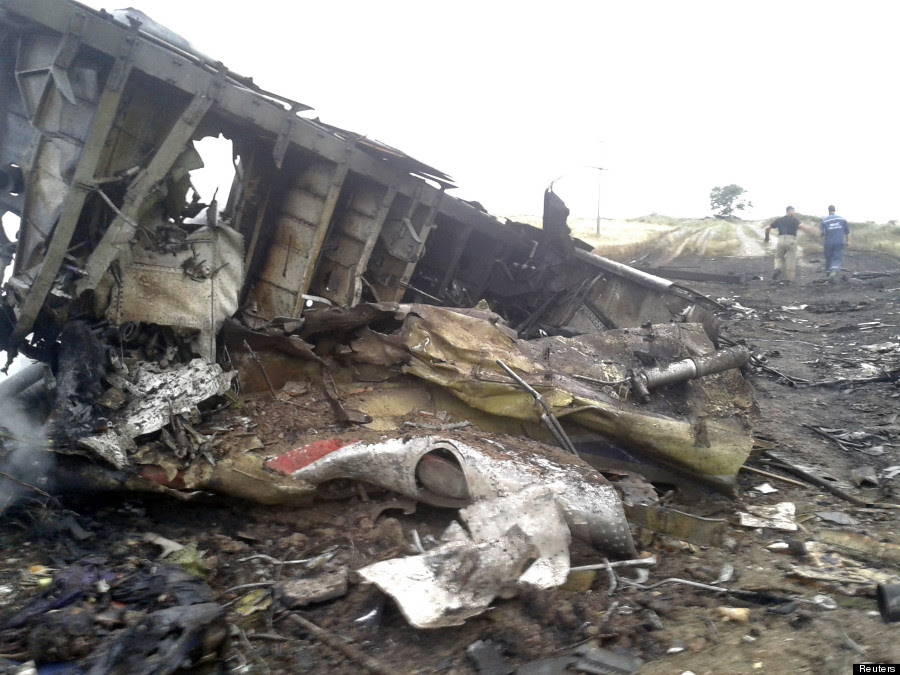 As usual, PR and financial considerations dominate the hand wringing. All those posturing before news conferences are full of words, empty of facts. As is this pathetic Cobra Committee of minor players.

For example  how can the authorities not know who were on board? All that security to get on an aircraft useless! When tasked with producing an accurate passenger manifesto, we get this shoulder shrugging. For all we schmucks are told there could have been 40 odd, armed to the teeth, terrorists carrying a lap top bomb apiece.

One thing must be remembered. Western media will toe their political masters' direction. The unholy EUSSR/USA axis stirs up rumour and accusation with a specific allusion to it "must be Putin" or his separatist factions. All without one shred of proof.

Until The EU and American interests eyed up Ukraine as a potential new member of The West's harem, Ukraine was rubbing along. The meddling CIA global corporate government ambitions got impatient and pushed that ghastly Ashton woman forward to clumsily embrace a corrupt, new, enforced regime in Kiev. As clumsy as the same failed ambition in Iraq.

As for the vague facts so far known about MH17. The ground to air system requirements are for heavily trained operatives. There is no evidence the separatists have that capability. Additionally the route was supposedly safe if Ukraine authorities were informed.

Now the efficiency of flight planning leaves much to be desired. So if Ukraine failed to match this flight with approved procedures, then shoot it down. Skilled missile personnel from Ukrainian forces were possibly encouraged to be trigger happy. Something Russia is now suggesting and say they have evidence for!

Do not believe our lot of world government cretins. People as hell bent on world dominance as Islamic fanaticists. The former people who robbed us all in 2007 and are wholly in hock to drug barons and fraudster bankers. Give me Vladimir's nationalism any day.

If the West's mates installed in Kiev did launch this missile, the most likely scenario, then how much does that highlight Obummer's and his pals in the Fourth Reich's incompetent and murderous culpability. Aided and abetted by that wretched and minor Cobra posturing Committee in London.

We must wait and see. Just bear in mind who might have the most to gain from this ghastly event. Even if a gung ho accidental launch, Ukraine and The West will try desperately to blame Russia. If, as is probable, that fails, then it will be then trotted out as a terrible accidental firing and happened because of pro-Russian separatists in Eastern Ukraine.

People who saw how ghastly the EUSSR, USA backed corporate expansionism is. Family values sacrificed to corporate greed. Old people left to rot in brutal dumping grounds known as "care" homes. Magaluf Sodom and Gomorrah resorts encouraged as centres of drug distribution and societies in the grip of addiction to consume all and sundry but decency and morality.

Such is this breakdown of humanity in the West, this terrible loss of life will be little more than "collateral damage" on the road to a Common Purpose led world government. Not nice, so make the most of what's left of our often beautiful world, so spoilt by human failing. That is if you are not part of the drug addled under fifties!