Is This The Future For The UK? 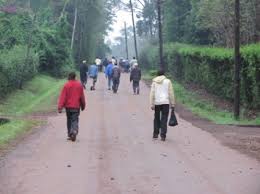 Our political classes and The BBC paedophile harbingers and thought police appear to continue an endless promotion of ever larger population growth and mass immigration come what may. So I thought I might
move on from the reality of today's Britain, posted yesterday and consider where the future might lie

Back around 1992 I made a trip to Nairobi. My first ever visit to The African Continent. It was a business, aviation related sojourn and some 36 hours were spent arranging for an aircraft to be equipped and  positioned, via Mombasa to Mahé . We made several journeys around the outskirts of the City at varying times of the day, dawn to dusk.

What I found enduring, as an image and memory, was the constant, ant like lines of figures walking in every possible direction. I doubt it was all aimless but it was fascinating to observe. Sure there were bicycles plus an assortment of, mostly ancient and battered, vehicles, usually overloaded in some way. As for the pedestrians, virtually all were barefooted and scantily clad.

Now I was witnessing a third world City of many thousands of poverty stricken, hungry people. Blank and sombre faces were the norm and though I'm sure smiles were to be had from time to time it was still a depressing air which hung everywhere. One now slowly becoming the same throughout the UK and European cities, as penury, imported poverty and deluded ambition is permitted to grow ever larger.

When we consider how suddenly energy needs have entered the same category as the NHS and Education status as political footballs we can but wonder how soon combustion driven vehicles will revert to the preserve of only the very wealthy, the political masters and gangsters. A time not so very long ago and one only briefly allowed, between the late sixties and early 2000s.

This excellent post also adds a piquancy to my own of the present. Since, as earlier mentioned, little change can be expected, in this direction of travel, are we not likely, ere long to begin wandering  about to keep warm, share our deprivation and delay the return to our cold, slum riddled dwellings. Might the future hold a state of affairs, if not already there, whereby Dickensian deprivation will become almost a hallowed memory of uncrowded and hopeful existence?

Whatever, I see little chance of the halcyon days of the seventies and eighties returning. Not least because of our lemming driven rush to abandon fossil fuels come what may.  Of course those driving this future to fruition consider their circumstances to be unaffected.

The horror to be confined to all those who once were the bedrock of commerce and growth but for their sin of self reliance for all, where possible, clashed with the evil of socialism's dogma and greed for power over others. A dogma which is now feared by the political classes and in their cowardice allowed free reign over those who should know better. Which, I suspect, is pretty well all 650 members of that rump of a Brussels minor chamber in Westminster. Not for hey the need to walk aimlessly everywhere, looking for work and food.