Labour Pretend To Be Sorry.

In Reality The Mass Immigration Policy Is Doing Its Job. 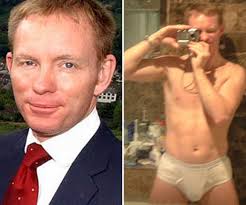 This quite repulsive figure, once a man of a different cloth than the less than pristine shown on the right, emphasised the quite awful and atrocious nature of our weak and self promoting politicians. To observe a day and 36 hours of this cretinous creature squirming on the end of a well deserved skewering, even by his biased BBC cronies, was a delight.

Not so pleasant, however, is the reality that Labours' mass immigration policy has been enormously successful in its intended consequence. That was to change the face of British politics in their favour by replacing an aspiring working class voter with a second layer of poor, State and benefit dependent immigrant population. As their dumbing down and disadvantaging comprehensive education policy denied and reduced social mobility to thousands and thousands of poorer kids, so this immigrant tsunami has created a further barrier to work and jobs.

Despite all the horrendous problems this betrayal of its own people has brought about by those deliberately inflicting overwhelming pressures on our lives and infrastructure, together with significant embarrassment on their rather pathetic and weak Shadow Cabinet members, in their heart of hearts they feel pleased with the creation of an underclass more likely to vote for the myth that is socialism and equality as highlighted in the link. A fact I find hard to understand hasn't provoked outrage.

With the placement of socialist "sleepers" throughout Quangoland, The BBC bought with the freedom of perversions and child abuse unpunished, the Common Purpose cabal has neatly stitched up circa 40 million endemic Brits, weakened democracy to virtual extinction and created a power base aided and abetted by Berlin and Brussels.

Add to this treason the dereliction of duty to all those killed in wars meant to keep us free and independent and the scale of disaster for our National identity and hard won freedoms becomes even more visibly but hopelessly apparent. From the picture in this link a smug and Eastern European second generation immigrant gurns with his nasty achievement.

It may yet be a smugness too soon and one which may yet betray the perpetrators with violence amongst the varied interests and imported tribalism we thought we had overcome in The UK, in the eighteenth century. After all Northern Ireland seems never able to recover from similar manufactured social engineering.  It would seem the left's hatred of all things not socialist may well be their eventual downfall. We can but hope.