Another Loony Left Lack Of Logic. 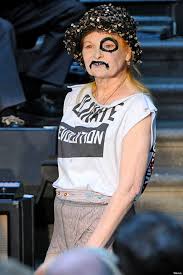 As the loonies and benefit funded barmy army of riff raff and wannabe noticed gather to shame our future the efficacy of their protest is highlighted by the current queen of Toons, Dame Mad As A Box Of Frogs herself, flaunting her obsession to be noticed by whatever means.

What a ridiculous figure this  coca cola head strikes. Only more stupid are those who glorify her "Empress's clothes" and scream their drug fuelled blindness to a "designer" who takes the chic out of shabby chic. Her addled stagger around that leafy lane in Balcombe was seized on by her sycophants and aping fashionistas who gloried in her star turn as a darling of the secretly wealthy but hidden hypocrites which form the grubby elite of the Left's favourite children.

It's these very same types who begged and tried with any means, including violence, to keep coal mines open well beyond their sell by date, regardless of their pollution history. The same suspects who fail to block EU edicts forcing us to deposit ever greater mounds of rubbish anywhere but via official disposal. methods.  Our Loony Queen and panto Dame Viv jigs around this fracking protest like a demented squirrel loving the opportunity to "protest" because her mob aren't presently the ones wrecking The UK, for a brief time of respite for the rest of us.

One thing is certain, the future will happen, as has the past. Whatever the rights and wrongs surrounding the energy and climate complex debates, human over population will remain the biggest scourge of this Planet. Energy, water and food will continue to dominate political failure for centuries to come. If the loonies had the intelligence to fight against wars, EUSSR diktat and genuine causes I would applaud.

As it is it's the passion to squat and foul, pollute and besmirch, with their unhygienic and filthy habits of lives of careless physical, as well as intellectual showing off and wallowing in dirt,  I find disgusting and appalling. You can rest assured someone else will be left to clean up this burgeoning cess pit, more pointed in its fouling than any dog deposits.

The TV news glorified the boasts of some somewhat less than slim, scruff of a woman, well seemingly female, telling the cameras of her personal lack of hygiene in the past couple of weeks. I hope the villagers of Balcombe might stop and consider which is worse. A carefully controlled and warmth giving gas extraction benefit to all, or the establishment of a so out of date bunch of hippy nomads' squatter commune, too lazy to get a shovel and dig proper latrines.

I could go on and dwell on the unsavoury habits of such people. However it might cause too much queasiness. All I can suggest is that any protest receiving the self promoting ugliness that is Dame Loony's
PR signature is seriously flawed. They can choose to clap and cheer their slum of canvas for now but what they are paving the way for is a quicker pace at which to reach this point in human existence and fight over fuel!