Or Is It A Necessity? 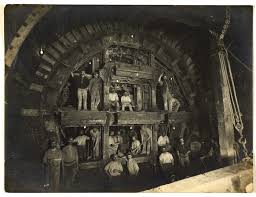 Just a few short years ago, when OR was a lad, tongue in cheek, coal mining, burning and hell on earth pit conditions, were a fact of life. I remember the old Brum Snow Hill Station. A soot and grime coated nightmare of dark and dingy filth. A place staffed by equally dirty, scruffy and bolshi staff, archetypical of so many State employees, even today.

Most weeks we could read of mine shaft collapses and pit casualties and deaths. Yet there existed a powerful kinship among those workers, their families and their workmates. One rapidly exploited, albeit sometimes with good reason, by trade unionists, few who deigned to actually work in the bowels of the earth. That this industry faded and all but disappeared, in some respects, was no bad thing.

However the vested interests, gas and oil moguls,  for whom alternative supply was paramount, were not backwards in coming forwards to nudge the acceleration of coal's demise. As then, so today. From a voice of common sense and reason, Delingpole; "Little wonder a furious attempt to blacken shale gas’s reputation is under way, driven by an unlikely alliance of big green, big coal, big nuclear and Gazprom. The environmental objections to shale gas are almost comically fabricated or exaggerated. Hydraulic fracturing or fracking uses 99.86% water and sand, the rest being a dilute solution of a few chemicals of the kind you find beneath your kitchen sink".

A leading fruitcake campaigner, Tony Bosworth, is being trotted out for his 15 minutes of fame. This to lecture us all on how the potential for releasing us from a self inflicted enslavement, to his take on life, is a big mistake. Bear in mind, this is one of the global warming alarmists with chameleon like convenient changes of colour. AGW is now so discredited, they became climate change "experts". Then environmental "campaigners", all desperate attempts to keep the scam plates spinning, for their own ends.

The idea that the billions of tons of concrete and steel eyesores, that are expensive blot on the landscape, horrendously expensive, resource draining structures, are superior to natural gas is a pathetic stance. Yet, as we know, this "climate" industry, lobby fodder minion, career path direction, for these less than brilliant minds , is a potentially lucrative one. One not needing the discipline of genuine scientific capability and thought.

I have little doubt that this man is but another manipulated and massage puppet trotted out by the left, the BBC and ironically, their Lancelot windmills of big oil and big gas. As Delingpole points out, shale gas is a life saver for energy needs and we are blessed with huge reserves. As North Sea oil bailed us out of the 1970's black pit of Labours' incompetence,  these reserves can bail us out of the deep, deep, hole dug by Testicles and Snotty. Also we should consider that if fracking starts to produce big benefits to the UK before the next election, that wouldn't do Labours' "we're all doomed" mantra, a lot of credibility, either! Not only that, it might well, probably, even, keep the lights on.

All that, of course, won't make our bills less expensive. They are under the iron grip of stupid EUSSR dictatorial remit. The figure mentioned in the link of £600 pounds by 2020 is ridiculous. It's costing pretty well £400 a year now. All to waste on senseless turbines and grotesque solar panels. Both technologies trotted our as never being in need of replacement.

The sun and wind may not need renewing but those ridiculous structures will have to be replaced on a regular basis. How stupid is that, to call it renewable energy, when its cost is little different than the need to replace your mobile phone ever few weeks? Or so it seems. So let's not "Frack |Off" but get bloody well fracking!
As the pols love to say, "for hard working families".