All Around Us Are Meaningless Words. 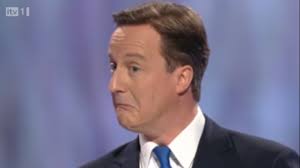 So our Camoron is really rattled by the very people he dismissed so casually and nastily, just a few weeks ago. Nigel Lawson has seen the light and also advised "The Boy" that all this cant about renegotiation is nothing but hot air. As if he doesn't know already.

This is the man who fibbed his socks off to get into Number 10 with absolutely no honesty once he was there. He spouts ever more nonsensical "cast irons" whilst totally oblivious to the fact nobody believes or trust him, any more than they did Bliar. Camoron is a closet europhile and like his predecessors way to to Heath, he thinks he might become a USA style President of The EUSSR.

I suspect that carrot is dangled by the Sir Humphrey Brigade to further their own agenda to be part of a bureaucracy so large their salaries and perks would outstrip, as it almost does anyway, the Private Sector Bosses and Bankers.


The fact that none of them can run a piss up in a brewery doesn't matter, of course. All of them think that tax is there forever. With the carnage wrought by incompetence, corruption and stupidity, however, it's not looking so rosy as it did. With the Germans now waking up to the lead role as guarantor to this mayhem and ever larger debt mountain, it may well be that Cameron's cast iron guarantees will be unnecessary other than to continue to highlight how out of touch the man is.

He looks likely to share with Snotty Gordon the label of a PM who never won and election. Unlike the Scottish lunatic, he may not only lose an election but a whole Party membership. Indeed evidence is mounting he's well on the way to both "accomplishments". Not a lot to go on the CV is it?