The Breeding Of Monsters. 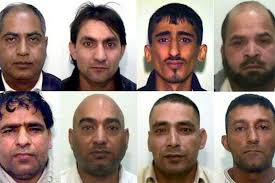 As if the Philpotts and their feral ilk were not enough, our wise and learned, in touch, moronic leaders, in
particular those of the Socialist kind, chose to create a society full of even more characters of a nasty persuasion from across the World. All I see of this multicultural influence is of this nature.

Yet positive discrimination and perceived racism is the answer our idiotic hand wringers come up with.That we should dare to question the nightmare we now live in and resent the huge number of seedy, dirty and sullen inner city ghettoes, forced on us by whatever reason, I fail to understand.

It will get worse. very much worse. Already our overwhelmed NHS, police and education resources are broken and cracked. Foundations once so strong have been sucked dry and leave a barren, dying nation. One unable top cope with water demand, despite the latitude. Our supermarkets will, ere long, take on the nature of those in the underdeveloped, overcrowded slums elsewhere on the planet.

Empty shelves and the luxury of choice will, through the inevitability of this ever swelling population, become the norm. Sure, those responsible, or their children and grandchildren,will be protected with what their greedy forbears manage to steal from the rest of us. The Bliars,Kinnocks and the other hypocrites, will leave huge legacies denied the rest of us. Outside those gilded cages of questionable wealth and zero morality, life will be grim indeed.

Just stop and think. What do all of the World's poorest nations have in common? Vast and teeming hordes of poor, exploited and inhuman objects for the lucky, or corrupt, more affluent to use. It is the fear, in bankers and their political allies, of the consequences of their greed, that drives them on. I guess it was ever thus.