For All Sorts Of Reasons.

Even I, in this crazy time of daylight robbery and mugging by global political and corporate spivs found the Severn Tent announcement rather early and immensely funny, albeit predictable. Today the new rob the citizens blind tax year begins and before we can say hear we go again, Severn Trent, after a few dry minutes or even days, comparative to the wet weather endured for a year or so, start the water shortage mantra. Of course it's really about their incompetence and lack of investment, in plugging leaks or providing storage for that God given gift of water.

These utility companies have become little more than places to park friends of friends. Part of the corporate inner circle merry-go-round. Competency and genuine success is not a requirement. Indeed failure in the NHS reflects the ridiculous manner our world now operates in. Every corporate jackass feels duty bound to spend more time fiddling gigantic pay-offs, salaries, pensions and bonuses than ever actually doing a job of work.

That these clowns are so deeply part of the climate change scam, the very idea of actually preserving and storing what is, in the main, an unlimited supply, free gratis, resource, escapes the idiots. Sure, it's funny as hell how places like Spain never complain about long, hot, dry summers. Yet our cretinous and greedy conspirators sit idly on their piles of dosh, grinning at the downpours swelling their pockets at our expense. Notwithstanding that circa 20 million imported immigrants soak up all we have in ever overwhelming degrees.

What a shambolic and ridiculous scenario. I really do anticipate a long hot summer. Not least because the ignorant purveyors of global warming, sorry, climate change, need some moral uplifting. After all decades of zero warming are now known to have happened by many who, previously swallowed, multi-millionaire winners of the climate scams, such as Gore and their confidence trickery.

That's where some of our money goes. Our water and Utility Companies all want some of the action. Add the likes of Bliar and the Champagne Socialist greed to the demands on our hard won earnings and soon we will all be robbed as big as the poor and newly impoverished Cypriot people! Well and the Greek, Irish, Portuguese,  Spanish, Italians....................................

Still, try and enjoy the coming hot days of summer. It could be worse and be like "The Battle of Britain", when those long, hot days masked the horror faced back then. Today it's all wine and roses, Ed Balls and joyous debt free legacies bequeathed by that old, mental fraud below! Remember him? You should, He and his "team" wrecked our lives and the future of our grandchildren. The picture is from his grovelling apology for being caught out that he regarded his core voters as bigots! Takes one to know one, Snotpicker! 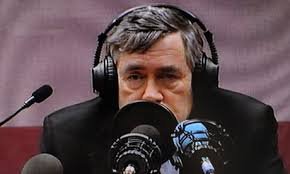