An EU Devoid Of Honour And Fairness. 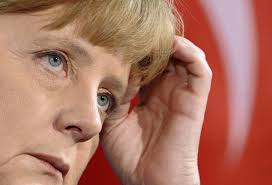 Wow! The EUSSR have been rushing about in a demented realisation, at last, that it's all going pear shaped. The EU Füherin, Merkin Merkel, tossed in a pre-election hint to the Brussels Sprouts that she's not a happy Bunny. Why would she be, as her beloved EUSSR behaves with the same self destructing narcissism as her once held dear GDR and Stazi run dictatorship.

Now it is being suggested the Germans have had enough of bailing out the euro blighted nations (EUSSR States). How true this might be we cannot know, since, like all devious plotters and despots, it;s so very secret. What we can see and feel is a failed enterprise in its death throes. Not only that but the collapse of the euro is now factored into the global thinking and trading.

Now I'm not suggesting that Common Purpose is giving up. Only that they know how badly wrong they've got their tactics. Too much arrogance and hubris, which ignored the potential might of the will of the people. Add their, Common Purpose, indebtedness to the gangster fraternity and you have major problems with your plans to rule the world!

I've no idea what happens next except this. I doubt very much the euro and EUSSR can survive. The most likely scenario is a dismantling of the edifice and ironically, a proper trading bloc, as sold in the past, as a smokescreen to hide the federal plan. That of a Common Purpose drive to create a global government. In the mean time deutschmarks will be back on sale and very expensive.

If all this sees a return to neater and tidier trading between Nations, not protectionist, self-interested bureaucratic stupidity, rules and regulations, we shall all be better off. Rich and poor. If the grip on all that by banking fraudsters and criminal gangs, sat at the highest tables, is also weakened, even better!