Gun To The Heads Of Cypriot Depositors. 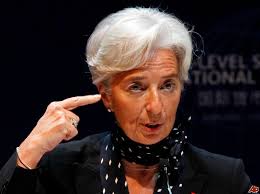 She was a placement by the EUSSR despots to do their bidding and divert cash to their cause of Germanic dominance. That she is a dubious and nefarious likely crook is just par for the course of the EU game play.
It remains such a repeat of the shrugged shoulders beloved of scared politicians in the 1930s.

All that seems to be unsaid by these nasty and unpleasant people is to let the Greek and Cypriot people "eat cake". I suspect, in the modern way of things, they're more likely to be force fed unpalatable pieces of crap bank notes, no longer worth the paper on which they are printed. Despite Putin's backing off, against some unholy pact with the EU Commissars, his Prime Minister has expressed horror at the losses his countrymen face over this.

Now, boys and girls, if you have savings and deposits throughout the many backwaters of an EU banking system, devoid of credibility and honesty, what would you do right now? With any sense you would flee as fast as your electronic banking keys will let you and ditch any holdings in this monopoly money that is the euro.

You may be certain Ms Lagarde had already moved her ill gotten gains out of any "insider knowledge" locations such as Cyprus. After all she does face at least large legal bills, if nothing else, from her fortune derived from who knows where. All I can say is she is every bit a part of the Global Mafia Cartels behind the Merkel ambitions for European dominance. After all who but drug barons and Mafia linked people have any dosh left, after the EUSSR's spectacular theft over the years?

Of course this theft of depositors money in Cyprus is just a beginning. We do live in that supposedly  Utopian scam of a global village. Hence the rapid expansion of any wheeze that offers the Bilderberger Common Purpose thugs licence to pillage and murder. I keep expecting people to rise up at this blatant behaviour but it would seem the grip on power is so absolute and the preservation of the Fourth Reich so paramount, no resistance can be successful, can it?