Forgotten By Most But Not All. 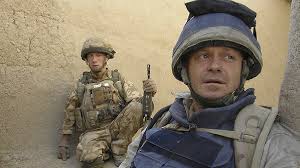 We suffer daily a litany of BBC and Leftie crap, day in day out, about how "cuts", which in reality are meant to be savings, are causing hardship and stress amongst the home cinema, giant screen watchers of the sink estates and slums of Britain. Well, you pathetic illegal war monger instigators of Labour, stress, in the real sense of the word is etched on those faces above.

Not for these guys the luxury of which pub to trash or deface over a long weekend. Not for these guys the pretty, pretty, smug and empty gossip of the Sunday Times "Culture" magazine and their £ 20K pair of  "Emperor" shoes designed to be worn painfully just once. So if you deign to visit a Church this Easter weekend, spare a real prayer for those stuck in a quagmire of political imbecility and ignorance.

Then, having said that prayer, take a look at the unabashed and blatant mind messing awfulness to be read here and weep for the lions led by donkeys. The title of the US "mission", OEF, for Operation Enduring Freedom. That freedom being the surveillance culture of The Western way, would it? Or the purloining of citizens money to service the glaring stupidity of the rich and greedy but failed bankers? The mass failure of Common Purpose and its global obsession with power over everybody.

From this almost childish language in the pages of the publication we also get this, "Britain’s own security is at risk if we again allow Afghanistan to become a safe haven for terrorists. The aim of the international community is to prevent Afghanistan being a terrorist sanctuary again." Now how many years has this claptrap been peddled?

Is it not a pity we cannot do the same, at a very much reduced cost in lives and debt mountains, in and on our own very shores? How much in credibility and more debt has this saga cost us.? Naturally it's all linked to the monolithic and nightmare big brother in Brussels whose strings are firmly pulled by the ever mightier GDR Stazi woman from Berlin.

For me these terrible injuries and wasted lives in Afghanistan are young people with a, in the main, a decent sense of purpose, of self and of aspirational character. Sadly, whilst they are doing their duty and risking their lives, for the price of a Mandarin regularly consumed bottle of claret at the "Club", our Nation is daily overwhelmed with people of a mindset heavily similar to the very people we are fighting in Afghanistan. There the moral high ground rests with the National freedom fighters, I'm afraid. Whereas, in The UK and Europe, that honour goes to the minority, as yet, relatives of the "Brotherhood". Notwithstanding they are as alien as we are in those fields of conflict abroad.