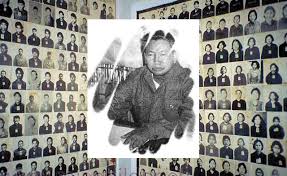 We could place him surrounded by photographs of his victims, like Pol Pot above, easily.


Fellow communist to David Nicholson of The NHS!  "An attempt by Khmer Rouge leader Pol Pot to form a Communist peasant farming society resulted in the deaths of 25 percent of the country's population from starvation, overwork and executions." Both men without shame.

Of course socialists and Labour have their propaganda arm to help them cover up incompetence, greed for power and their target culture's genocidal consequences. As Testicle Bully Balls and his pathetic Wallace Milibad play superior politics from the opposition benches, I cringe at the thought that the wreckage the bastards left behind contained more than metaphorical skeletons.

Throughout the Public Stazi Services these murderous and resentful of the populace, lefties, planted their cronies. Nicholson possibly the most lethal and scary of them, in order to cling to a power stained with gore from illegal wars and the mortuaries of our hospital corridors. For decades plus  Labour have postured and strutted their forged credentials of  "The Party of The NHS" all the time. Yet once given control,  they proved to be killers of patients, bullies of the vulnerable and "pathway" shovers into death of the weak and helpless.

"Safe in their hands"? As safe as a prostitute alone in an alley with Jack The Ripper. Yet as the evidence of appalling incompetence, painful and humiliating treatment, and premature deaths becomes ever more documented, not a peep from anywhere but the middle class leaning Daily Mail. Certainly nothing from that headquarters of The Grim reaper, which is now housed in Brewers Green. An apt address for incompetents.

No matter how much PR from the BBC and the Left gets spouted, I know of no other time in my life or post war history, when death was meted out in such large numbers by a Government so useless as to place their greed for power way ahead of the very lives of the rest of us. Shame just doesn't appear in their lexicons. Only the cataclysmic post Government secrets occasionally exposed tell us the true reality behind Bliar's gurning face and Brown's manic, nervous, nasal excavations.

Bear in mind also, that which we are discovering is but a minute glimpse of so much still kept quiet. Dunblane springs to mind. If we consider all this unimaginable evil that has and still does so heavily stain our banking and financial demise and our Westminster bubble, we can argue that politics today are nought but a genocidal social engineering, so beloved of Pol Pot.

We can argue the merits of each political party but can we in all honesty not say that one stands head and shoulders above the others, in its proven total hypocrisy and nastiness? Their deep rooted unpleasantness and dogma perhaps little better than the Civil Service now in their camp. A bureaucracy now led from Pol Pot's new HQ in Brussels. Let us hope that at least "Butcher"  Nicholson gets sacked. Sadly Veggie Camoron hasn't the cojones. Of course instead of going on trial for manslaughter, Nicholson will, if fired, pick up a few million to ease the discomfort. Hopefully we can wad it up his ar*se!