So Many Of Us Have Warned For Years. 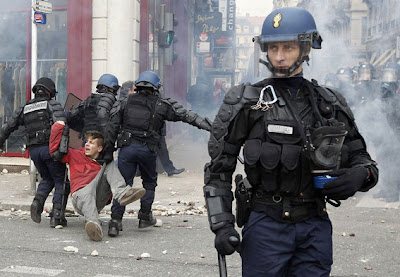 Albeit this is just their new police force.

The EU carries on and you just have to marvel at their incredible manner in implementing whatever they like. Bankruptcy is swatted away with a superior flick of the wrist. Dissent ignored. Corruption, collusion and criminality perfectly accepted, if of benefit to common purpose and the goal of a global State. In everything they play a very long game.

Whilst spinning it all out, the head honchos quietly plot behind there substantial and luxurious scenes. The irritants such as Camoron, Milibad and Clegg are quietly nurtured and persuaded that their temporary time at state level is not worth a democratic candle. If they happily, albeit secretly, toe the many lines demanded by this monster of a creation that is The EU, all they desire for themselves will fall into their laps as lickspittles always hope.

So, as predicted on this blog and many others, the pretence that the running down of our armed forces is an economic decision, is pushed down our throats by the compliant media. Meanwhile the real agenda carries on. That script is to water down anything which might prove to be of a Nationalistic flavour or even dangerous to The EU cabal.

It's not desirable to have large numbers of troops  or police forces on the ground, when subjugation by force is deemed necessary. So, as in Greece, soon, in five maybe ten years time, enforcement will be always from forces happy to earn their corn beating and suppressing peoples they will see as not their kith and kin. Many of the once proud nations of Europe will be every bit as occupied as in the Nazi era.

So much for why we fought two world wars, just to roll over and surrender to a crowd of spivs happily in league with all and sundry. Not only The EU but the likes of the UN. A model for the EU structure and even sharing the same colours. Sadly their true motives should have been swastika based and on a red background, to represent the blood shed in the past and to be lost in the future suppression of freedom and democracy.