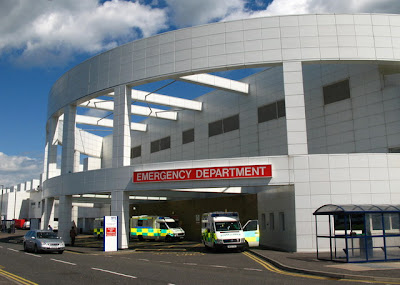 News or promotional subterfuge?  Plus Balls  forgetting his nightmare incompetence when in Office, as Marr
produced yet another fawning display of an adolescent crush, whenever a Labour pillock is placed before his lip licking tongue, stained in rather dubious material.

I really loathe the BBC, for all the reasons we have recently been given a glimpse into. Add the propensity for employing child abusers to the outright bias of leftie champagne cork popping is all bad enough. The constant trotting out of anti-right wing propaganda and attack is grotesque insomuch we are forced to pay for it.

Panorama, that bastion of total and honest political commentary, bathed in self righteous condemnation of The NHS, for the benefit of scoring points, will fail to give prominence to the temples of modernity used by the last Government to buy votes, curry favours with rich developers and line their own dirty pockets. Now I realise this is going on with this Government. For the present incumbents of the trough centre of Power, its "green" energy that funds the more profitable part time thieving.  Earning more than a year's minimum wage in a few days.

So let's sigh and say "it was ever thus". Sure but why the constant pretence? Why not put everything out in the open. Blame the fat and idle for stuffing their mouths every chance they get. Tell the drunks at the hospital doors to f**k off and come back when sober. Treat the intelligent as better than the thick. Give power to those deserving and who can inspire the less able to don armour and follow them into battle for themselves.

Why all this poncing around as though we're somehow different from the past. We are not. In many respects our nurturing of the trailer trash is more stupid than trying to shame them into being better or at least less of a bloody nuisance. Yet no, all we get is the pathetic left, slamming anything that smacks of success and intelligent decency. The result is a political class virtually identical in its sucking up to an electorate it despises.

Together with a propaganda machine, brilliant at blowing its own trumpet to silence its true activities behind its depraved scenes, our political corruption goes on. The postal vote rigging, now rife throughout our system, is more deserving of a Panorama than the brilliant but stifled political football that is The NHS. Still, that little vote rigging scam was a Labour child, so that must also be swept under the lumpy carpet of modern politics and broadcasting.

A recent comment here said that no one was listening to our frustrated cries. Well history shows that to recover a loss of hearing can take millennia. So be it, I won't, as yet stop saying what I think. I suspect that will come from a bullying State, if I were ever considered too loud.