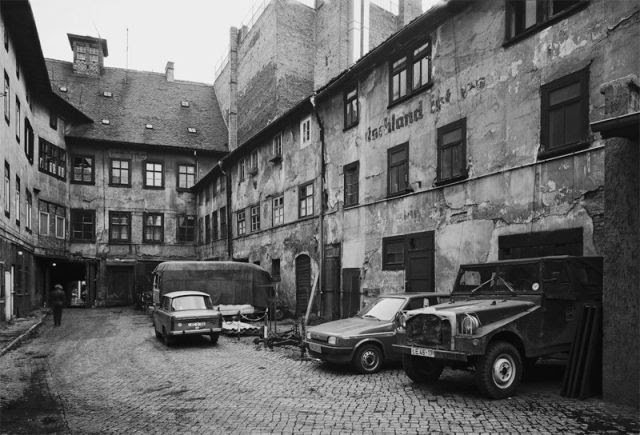 A wonderful transformation of East Germany.

Going backwards, methinks, for the rest of The EU Nations. The image taken from the photograph link above does allow us to see what money and a business, work ethic can do. Unfortunately, whilst Germany basks in its reunification, someone has to pay for the cost of it. My "going backwards" link at the beginning gives, us a snapshot of the awful and depressing EU at work.

Endless and pointless activity so like that beloved of the USSR and its bureaucratic technocratic model, is now firmly ensconced in The EU camp of misfits. Albeit the pictures linked to carry a positive message, the reality of the mistakes made haunt all of Europe, economically. This is described perfectly in this link.

Even though the euro and The EU now form a corrupt and unaccountable edifice, Merkin and her cohorts in Berlin know full well their plans for Germany depend mightily on staying the de facto head of a Federal Europe. If Greece were allowed to leave they also know it would be the hair for a spine failing camel.

So we can begin to realise why The EU is never going to fail without an almighty effort to shore it up for as long as Germany can remain perceived as an OK safe and economic powerhouse. The reality is easily found, however, if we look at the still wide gap between the two sides of Germany. Reunification was just too big a bite to swallow and without The EU to cover these unpalatable facts, Germany would quickly look to isolationism as a better solution than the busted flush of The EU.

Just imagine if all those EU States feeling Germany holds the key to ever more lending and bailout largesse, realised that cupboard is as bare as their own! Whilst  endeavouring to nurture the myth of financial security, the German people are  beginning to suffer massive tax and price hikes. Particularly for energy. When all's said and done the real state of Germany is little better than it was in the 1930s.

It is little wonder that the inevitable failure of The EU, to recover from the financial nightmare of its own corrupt and deceitful making, keeps the Merkel Merkin somewhat ragged. The last thing she needs is a fractious and unhappy UK stirring the mess. She will no doubt give Cameron a hard time this coming Wednesday for failing to keep The British people in the same mushroom state as her own.

Dangerous times for all of us but I would argue that any Country breaking ranks, be it Greece or The UK, would fare much safer than if they remain in this bunker of stupidity. Remain only to follow the Lemmings that are the EU Commissioners, the political puppets of a Franco-German axis, both doomed as in history, by their unholy alliance.