Tip Of The Iceberg. 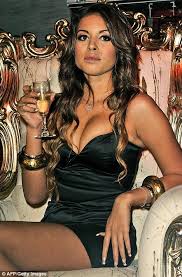 Raedwald poses the question was it something in the water back in the sixties and The BBC superior smugness over what went on. Sadly, it's very little different today. The picture above shows just one young woman, for whom the selling of her sexual identity, in the hope of fame and fortune, is but one of many, many thousands of girls prostituted and pimped for the delectation of the scum who inhabit every corner of our establishments.

The corruption endemic in human nature, particularly at the higher end of the greed motivated food chain,  is normally shrugged off as "lucky" for some and not really that influential in our own struggle to make the journey through life. Unfortunately those in the "know" target all of us in the never ending quest for superiority and riches and to hell with who gets hurt.

Such is the current success of the rich and wealthy, the likes of the bottom feeders, pun intended, such as Mandleson, Bliar and so forth, that very little of their publicised excesses resonate. Bar, that is, the abuse of children. Here the matter of fame and fortune blurs. Few red blooded men would look at the girl above and not feel a degree of normal attraction. That many early teenage girls can be passed off as much older is commonplace.

In one of the revelations by a victim of Savile's, (plus one or both parents happy encouragement) was that having sex with that weirdo was to further her hopes for a star studded career. It was the second "hand-me-down" experience she complained about, at the hands of a "mate" of the blighted knight. Now am I alone at being aghast that this loose morality and shameful behaviour is so easily carried out for the very unlikely chance of that dreadful celebrity status?

It is of little surprise that those with influence and the mysterious ratings draw factor are more than happy to exploit the stupidity and lack of morality so easily dispensed, not just then but even more rife today? I doubt the X-Factor auditions are particularly free of the Savile syndrome of that ilk and period, do you?

So we will see a short period of hand wringing but nothing will come of it. A few anxious politicians and media whores will be nervous but the scale of cover up available will sacrifice only minnows. The real sharks will do a Dunblane and we shall not easily see exposed the big fish swimming menacingly in the deeper recesses of our establishment. By this, I mean the even more horrific and terrible crimes against very young children.

When all is said and done, post pubescent children are on the very edge of adulthood, many beyond. Albeit the sexual exploitation and trafficking of boys, girls and women, is abhorrent, it is never more so than when pre-pubescent and innocent children are involved. It is then the paedophiles who might be threatened with exposure get scared. Where Berlusconi might feel hard done by, those, such as believed of Mandleson, would feel more vulnerable to the anger and ire of their fellow man.

If, a very big if, the perpetrators of the violent, sexual abuse of very young children were to be exposed then not only jail but sheer terror would await them. In my view, justifiably. Instead we are likely to move towards such behaviour as being classed in a similar fashion to the tolerance of buggery between men. Then we really will be into an arena as horrendous as immorality can possibly be.  I suspect Satan himself will be rubbing his hands in anticipation, as the ever deepening descent into human depravity continues.

Since the masses happily accept much that is heaped on their heads, in everything else to do with our modern shambles, bequeathed by heathens, why should we expect condemnation of anything at all? Only time will tell.