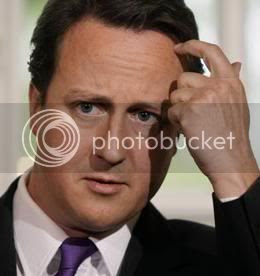 So the chorus  rightly begins. Today marks the beginning of the end for the disappointment Cameroon has proven to be and surely he is due some time soon for an early bath? My reaction to his selection as Tory Leader was one of great sadness that yet another real person, in the shape of David Davis, was to be sidelined in favour of a PR guru and upper class thicko.

Our UK Establishment has always regarded education as proof of intelligence. Despite the evidence to the contrary, that attitude still prevails. Thus we have a Civil Service and Government manned by seemingly able, top people, mostly men, whose claim to those exalted ranks is usually an Oxbridge degree gained, more often than not, via privilege and private education.

When those privileged classes produce the rare intelligence to match the profile we do get greatness. Churchill the shining example of that. Now we suffer the paucity of talent from more humble and wrecked backgrounds. Those punished severely by comprehensive experimentation and the social engineering stupidity of the left, leave us bereft of talent lost to commerce, science, medicine and engineering.

Some still make it but not many. The skill shortages and youth unemployment of the unemployable hordes also bear witness to the parlous state we are in. Cameron was meant to be a new star capable of great things. The PR machine of modern politics went into overdrive. Yet the niggling doubts about The Boy still allowed a drubbing of that nightmare 13 years of Labour, without allowing this wimp and closet, champagne socialist, admirer of Bliar, to take Downing Street.

After wooing that other thick but well educated Eurocrat, Cleggy, to hoik him into Number 10, the Boy was where he thought he ought to be. His mistake was, like all of our modern politicians, was to believe his own hype. Delusion made manifest, as he,subsequently, has floundered through indecision, bad temper and the slowly emerging realisation that he was not very good at the job.

Now this is all very well but after the mess we were left in by Labour and that psychopath, Snot Picker Brown, we needed desperately a statesman and a leader of substance. The Boy was never in that mold and so stagnation and ineffectual Government, happily suiting the Mandarins and their EUSSR agenda, was and remains the result of this moronic prime Minister.

Bliar was dreadful, Brown deranged and now The Boy a pale imitation of his predecessors. If only the British people would wake up, throw out these three useless, time expired Parties and change the political landscape for the better. Sadly the Boy appears to be exactly what "They" wanted to stave of any public rebellion. His inadequacies nicely camouflaging  the fifth columnist, EUSSR, army, that is the Civil Service upper echelon.

Who is there who might save us? I doubt Boris, Nadine but certainly Nigel Farage. If only he could be given the chance. Were he to break through he would garner many defectors from the other three. With luck the handful of reasonable, non career, genuine patriots. Drat, I just woke from my daydream!