There's Always People To Do The Dirty Work. 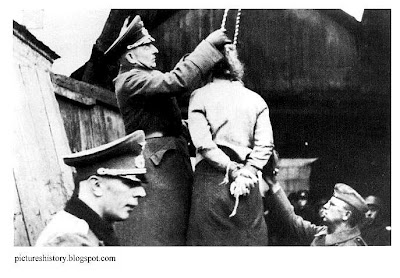 Human Nature is something politicians and control freaks always believe they can manipulate, control and change. In many cases they seem to be correct. We see this throughout The EU today. The more the mushroom compost depth grows the less likely anybody is to poke their head out to breathe, it would seem.

In the State's ever demeaning grasp of  our very DNA particles, for their own ends, there is no shortage of willing servants to do their master's bidding. That the Nuremberg  defence seems still to pertain in Government agencies I find very disappointing. Naturally the chain of command muddies the waters with the Civil Service Mandarins' ability to keep their responsibility under wraps.

Never more awful and horrendous an agency and their Global counterparts, in the connivance of evil actions,  is the espionage community. Sure the storm troopers of modern policing,  my Bete Noir and the rest seem easily bought but the picture above shows where this is all headed.

That picture highlights what lengths individuals will go to preserve freedom. I suggest that modern political,  corporate and gangster despots have realised that, though torture and murder of individuals can go undiscovered, if you get a trigger event that sparks a total awareness of the corruption and fear being employed, you get overwhelming resistance.

An event such as the killing of Mark Duggan is a good example of a trigger. Regardless of the efficacy of his killing in a legal or moral sense, it did what the authorities dread most. A collective uprising. Unlike the resistance forces' mobilisation in war time, that cause was localised and a favoured polarised singularity.

My argument is that if, or rather when, a common and more just anger manifests itself universally, then a movement more likely to succeed is born. Such a growing justifiable defiance does rely on communication. Just as in war in the trenches, in  the air or in the bars and cafes,  mobilisation needs contact and an exchange of plans and strategies. The Internet and its magic of instant electronic exchanges has changed the goal posts. It is, or was, a flatter pitch than in the past. Witness the G20 police nastiness.

The lame excuses and trotting out pathetic mantras of "safe streets" and paedophile entrapment doesn't wash. If these treacherous Kapos in our eagerly complicit secret services refused to turn on their fellow citizens we would all be better off. The question often asked, or should be, is how do these evil collaborators sleep at night? It always starts with spying, quickly backed up with censorship. Curfews and supervision can't be far off.

Oh, by the way this subversive attack on our lives is to cost us  £2billion. Now which Government diners will get most of that I wonder! Still, I guess electronic Auschwitz guards will demand expensive gas masks and uniforms.