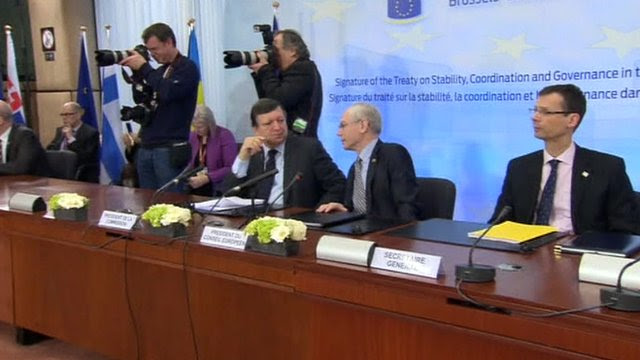 Before I write this post I just want to say how pleased I am to see yesterday's beautiful painting being embraced elsewhere and reiterate my hope the YouTube clip goes viral. The painting and the poem moved me to hope and real pleasure that we still produce such beautiful talented artists prepared to use their ability for other than detracting and left wing dull, boring nastiness.
As for this "treaty". Before the ink was dry Spain cries the ability to comply is impossible. The Netherlands have also suggested a similar reaction. As with Lisbon, the stupid and ridiculous imposition of budgetary ceilings just cannot work across such disparate economies and cultures. Furthermore, Ruinous Rompuy, fresh from his unelected renewal of some Presidency or other, claims that all this dosh being printed is not for investment but "stability".
From this link we get this, "Few of the 25 states approving the treaty are within the EU's traditional deficit ceiling of 3% of gross domestic product." and  " In the pact, states that fail to adequately implement the sharpened rules in national law will be dragged before the European Court of Justice." Then they will be fined! How ridiculous is that? They have no money, no trade, no food, riots on the streets and they will be "fined"! Of course the real strategy is military force,  already in waiting, which can do  an "Athens" whilst Rompuy dons his Gestapo Uniform and places Angela "Merkin's"  reps in charge.

So the drive towards a German dominated Europe will continue. Sadly it will get ever bloodier and more violent. Incredibly and most ridiculous of all, those States taken over will be done so under the guise of legality, their political clowns having signed these treaties! Now whether the German people relish or want this future I'm not so sure.

Some will feel angry and aggrieved that other States have not followed their prudent example, discipline, work and savings ethics. Others will note that this attitude rather pervaded in the 1930s sense of feigned aggrievement. Sure, it was to some extent justified but surely the outcome was somewhat disastrous. How stupid and ridiculous that this EU is heading for a repeat of the terrible past! 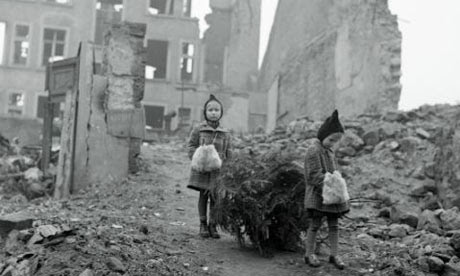 Is this to be, yet again, the legacy of plundering our children's' future?
Posted by Oldrightie at 08:53